Angry Birds Space is the latest Android game to gain the attention of malware distributors, who have placed infected versions of the popular game in unofficial markets.

Angry Birds Space is the latest version of the addictive Angry Birds Franchise, available on Android and iOS.

Sophos and Rovio, the maker of Angry Birds, warn users to avoid unofficial Android markets. Sophos discovered a fake version of Angry Birds Space that looks like the full game, but is actually a trojan horse that will install more malware on infected phones and tablets.

This additional malware allows the creator to control infected phones and tablets, potentially exposing personal information. Similar malware issues have been linked to attempts to send premium text messages that give a new meaning to bill shock. 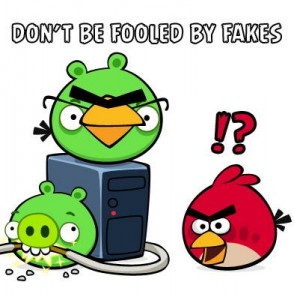 Users can download Angry Birds Space directly from the Google Play store on Android phones without any worries. While Google has faced Android Malware issues on the official market the company is working on  better security measures.

Unlike the iPhone, Android users can download apps from many places, which offers choice, but comes with added risks for uninformed users.

Sophos does not name the third-party Android market where infected copies of Angry Birds Space were found, but it is safe to assume that it is not the Amazon App Store.

This incident is another reminder to Android users to avoid third-party Android markets, especially for big name titles like Angry Birds. Unlike iOS, Angry Birds Space is free on Android so there’s no incentive to pirate the game.

Android owners should stick to Google Play, the Amazon App Store and GetJar for Android apps and games.