The saying ‘when it rains it pours’ best describes the situation surrounding the missing AT&T One X update as yet another mid-range smartphone, this time one of HTC’s very own, the HTC SV, has seemingly beat AT&T’s 2012 flagship to Android 4.1 Jelly Bean.

The update also comes with HTC Sense 4+, the company’s previous Android skin, which has since been replaced by HTC’s new HTC Sense 5.0. 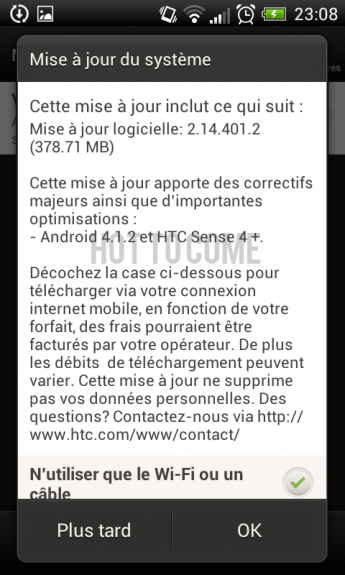 The HTC One SV Jelly Bean update has beaten the AT&T One X.

Those of course include Google Now, Google’s new predictive feature that can do things like display traffic on a work commute before the user leaves the house, a faster and more fluid user interface, improvements to the Camera, Browser and Calendar app, and better widgets. That’s only scratching the surfac of course.

It’s unclear what this means for other HTC One SV models but typically, software updates roll out in phases which means other variants around Europe should see the update arrive in the next few weeks or so.

And while this is certainly music to the ears of HTC One SV owners, it’s another sharp blow to the ego of owners of AT&T’s HTC One X.

AT&T’s variant of the One X, which was HTC’s flagship One series model in 2012, remains on Android 4.0 Ice Cream Sandwich months after the update initially arrived. The international version of the HTC One X received Android 4.1 Jelly Bean back in October.

With no relief or update in sight, it’s unclear just how many more smartphones will beat AT&T’s previous HTC flagship to Android 4.1 Jelly Bean.