A prototype app developed by the Computer Vision and Geometry Lab of the Swiss Federal Institute of Technology shows that the camera on your phone, when coupled with the app, could scan objects in 3D. Even if a consumer doesn’t have a 3D printer to transform and convert the scans into a physical object, the 3D scans can help consumers study objects more closely and create visual models for exploration. 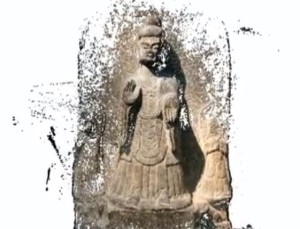 “Instead of taking a normal photograph, a user simply moves the phone around the object of interest and after a few motions, a 3D model appears on the screen,” CVGL wrote.  “As the user keeps moving, additional images are recorded automatically and used to extend the 3D model. As all calculations are performed directly on the phone, the user gets immediate feedback and can select additional viewpoints to cover missing parts of the 3D model. This is an important advantage compared to solutions that batch process all the images in the cloud at a later time.”

In the embedded video below, scanning of museum artifacts are made simply and easily, without complicated setups. The user can pan the camera around the object to capture various points, which are then turned and transformed into a 3D model on the phone.

This is a pretty significant advance considering that the cost of a 3D scanner can range in the thousands of dollars. By being able to leverage a $400-$700 phone (contract-free) and the camera on a smartphone, 3D scanning technology could be adopted by more users, further democratizing this new technology.

The app is said to be able to run on a “range of current smartphones,” and it was shown running on an Android-powered Samsung Galaxy phone. We’ll have to wait and see when the app lands in various app stores, and how much it will cost.