Today Verizon announced that the LG Lucid, an Android device that possesses a relatively low profile, will be receiving its upgrade to Android 4.0 Ice Cream Sandwich which means that yet another device has beaten the Motorola Droid Bionic, HTC ThunderBolt and Droid Incredible 2 to Ice Cream Sandwich.

The carrier confirmed the LG Lucid Ice Cream Sandwich roll out tomorrow saying that the update will be pushed in phases to customers. That means that those who own the LG Lucid will want to remain patient. Once the update is available, there will be a prompt indicating such. Owners might also want to try heading into the device’s settings to check for an update.

Verizon also says that owners can pull the update using the Software Upgrade Assistant Tool if using a PC. 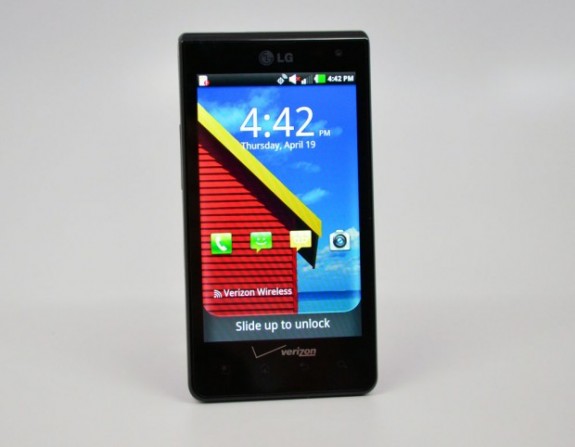 The LG Lucid beat the Droid Bionic and HTC ThunderBolt to ICS.

Android 4.0 Ice Cream Sandwich will be a massive upgrade from Android 2.3 Gingerbread and it will bring a new user interface, a customizable lock screen, an improved browser, a better Camera app, and a whole lot more. We imagine that the software will iron out any pre-existing bugs as well.

While this is fantastic news for LG Lucid owners, it’s horrible news for Droid Bionic, HTC ThunderBolt and Droid Incredible 2 owners who are still waiting for Verizon to release their Ice Cream Sandwich updates.

All three of those updates, which were delayed, have been passed up numerous times by ICS updates for little known devices like the LG Lucid.

At this point, only the Droid Bionic Ice Cream Sandwich update has a time table for release. Motorola promised owners that the update would roll out sometime during the fourth quarter of this year which means October, November or December. The HTC ThunderBolt and Droid Incredible 2 aren’t so lucky.

After their updates were delayed, HTC and Verizon remained mum and continue to remain silent on any sort of a roll out date for Ice Cream Sandwich leaving owners in ICS limbo.

Fortunately, we may see progress soon, at least as far as the Droid Bionic and ThunderBolt are concerned. We’ve heard that the Motorola Droid Bionic ICS soak test is scheduled to roll out tomorrow which means that a roll out could occur as soon as next week, provided everything goes according to plan.

We’ve also heard that HTC and Verizon are in the final stages of testing for the ThunderBolt ICS update and that it’s currently slated to roll out by the end of October.

Those dates are of course subject to change.