Appcelerator has just released a report that gives us a peak inside the mind of App developers for iOS, Android, BlackBerry, Windows Phone 7, WebOS and other platforms. This report points to an uptick in cloud services in apps, a plateau in developing for Android Tablets, high interest in the promise of an Android tablet OS and the real reason that Windows 7 is having trouble catching up to Google and Apple. 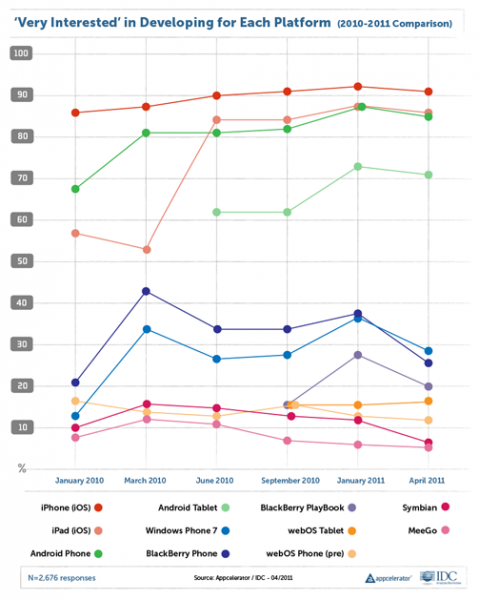 Perhaps the most telling result of this 76 question survey which went out to over 2,700 Appcelerator developers is the graph above, which shows the interest developers have in developing for specific mobile operating systems.

While Android has come up to be equal with the iPad, the desire to develop for Android tablets appears to have waned after a huge jump that happened right after 85 Android tablets were announced at CES 2011. The report also provides some insight into why there is a larger difference between Android for smartphones and Android for tablets than you see between the iPhone and iPad.

At the bottom you see the Windows Phone 7 taking a hit alongside the BlackBerry phone and BlackBerry PlayBook — all of which face an increasing challenge in capturing not only the consumer mindshare, but the time of developers. 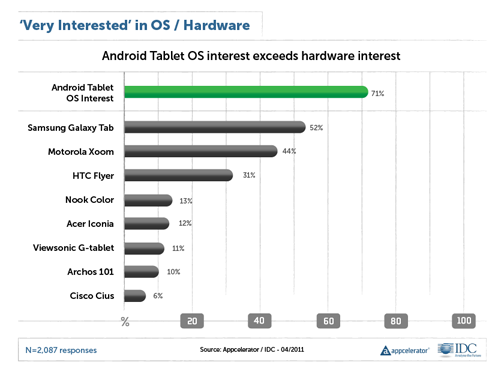 Android tablets face a number of challenges right now, one of the biggest being a disproportionate amount of interest in the Android Tablet OS, currently Android 3.0 HoneyComb, compared to the Android tablets which are available for purchase. In this survey which was completed just 2 weeks ago the difference in OS vs. Hardware was an amazing 20 points.

This reminds us of the early days of the Android phone OS, back in 2009, when Android offered a tantalizing alternative to iOS, but hadn’t yet delivered on the hardware end, carrier availability and attracted developers. When the Motorola Droid launched in late 2009 we saw an uptick in Android hardware interest which led to more developer interest and while it took another year, the interest in developing for Android phones has come almost on par with the iPhone.

So far Android tablets like the Motorola Xoom seem to be rushed to market before the hardware and software is ready and there certainly aren’t enough apps to show developer interest. Couple this with prices that compete with HDTVs and mid-range laptops instead of the iPad 2 and Android tablets have an uphill battle. Hopefully devices like the just released Eee Pad Transformer will help change this trend.

The Real Reason Windows Phone 7 Has a Problem

Nearly two-thirds of the developers in this survey said that they don’t think anyone can catch up to Google and Apple at this time, which doesn’t speak well for devices and operating systems that are as dependant on apps as they are hardware features. 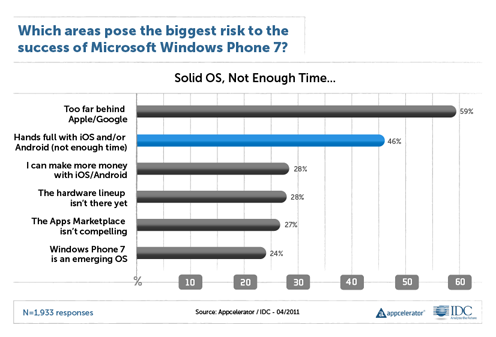 Interestingly, money isn’t the key issue keeping developers off of Windows Phone 7. A big part is the fear that Windows Phone 7 can’t catch up, but right behind that is the fact that many developers don’t have the time or staff to deliver another great mobile app and experience.

Why the Cloud is Critical to App Success

As users, we don’t always think about how the cloud relates to our Apps; especially if we aren’t using a service like Springpad or Dropbox which we associate with storing our data in the app. In reality, the cloud is quite a broad term and as Scott Schwarzhoff of Appcelerator put it, “The cloud is becoming synonymous with mobile.”

84% of the developers surveyed said that they would be connecting their app to the cloud in some manner this year, with an average app using 13 of the 44 cloud services included in the survey. 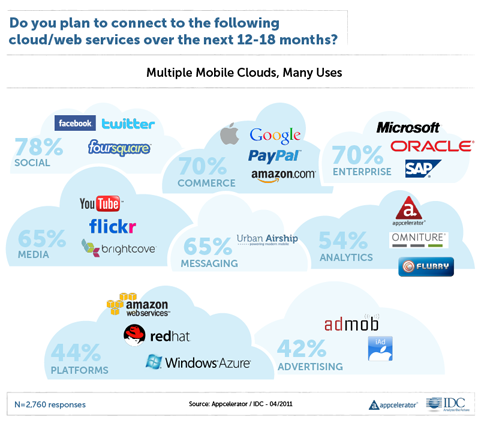 Why is the Cloud Important to Me (The App User)? 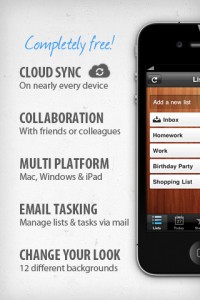 Over the past year we have seen developers try to transition apps form a one time use means of delivering a static piece of content to apps that offer ways to connect with our friends, download new content and make in app purchases.

Rather than keeping data on one device or placing a burden on you, the user, developers can tap into the cloud to keep your data in sync across mobile devices, the web and your computers.

Wunderlist is a to-do app and a great example of the benefit of using the cloud to move data between devices. When I first discovered Wunderlist it couldn’t sync between the iPad or Android devices, but now a half a year later, it Wunderlist uses the cloud to keep task and to do lists in sync across Android, iPhone, iPad, Mac and PC — without putting a burden on the end user to do complicated setup or use workarounds.

Wunderlist is just one example, the social sharing to  Twitter and Facebook is another example of the social cloud being brought into apps. When you look at the services shown in the app cloud image above, the list is much larger than many users would expect.

The bottom line is that we users are computing in an interesting time. Sure Google and Apple have a large lead, but that doesn’t mean they will always be the leaders. The entire app industry faces a collection of issuing including fragmentation, getting users to pay for apps and solving the problem of launching a great device without the app support when you need great devices to spur consumer and developer interest.

If you want to know more about the survey and report, you can download the full Appcelerator Mobile Survey for more detailed information.