Under new CEO Tim Cook, it appears that Apple is softening Steve Jobs’ declaration of thermonuclear war against Google’s rival Android operating system. The company is now no longer seeking the destruction and demise of the Android ecosystem, but rather, like Microsoft, is looking from the follies of Android as Google lacks strength in patents to defend the platform against intellectual property claims.

In the latest report, anonymous sources claim that Apple is asking Android partners Motorola and Samsung a licensing fee of between $5 and $15 per device sold, which could equate to 1 to 2.5 percent of sales per device. With licensing fee on the table, Apple could stand to benefit from the success of its largest and closest rival in the war of ecosystem. The amount is comparable to what Microsoft is asking Android manufacturers in terms of licensing agreements on key patents that Android infringes upon for Windows Phone. Essentially, with combined royalties to both Apple and Microsoft, Android hardware-makers are looking to pay at least $10 to upwards of $30 per device sold. 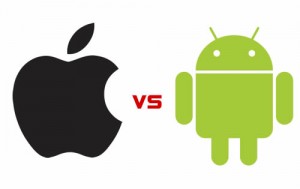 As Apple has been in continuous litigation with both Samsung and Motorola–the latter of which is being acquired by Google–in various parts of the globe, Motorola had countersued Apple and had asked for the 2.5 percent of sales of Apple mobile products. Essentially, if Apple and Motorola agree to terms, the cross-licensing could be a wash for both companies. However, if Samsung and Motorola do agree to the terms, it would set precedent for Apple to ask for the same licensing from other manufacturers, including HTC, LG, Huawei, ZTE, and others.

In earlier reports, Apple had begun negotiations with Samsung over licensing fees before it decided to file a lawsuit against the company. It’s unclear what stage the current negotiations are at, but sources familiar with the matter say that it is an ongoing process.

In the past, Microsoft had made bold guaranties for its Windows Mobile hardware partners against any lawsuit or litigation. Google does not appear to be doing the same with Android and each device-maker is at risk for any patent or intellectual property infringement that they create or that the Android platform creates in general.

In the smartphone race, if Android wins, so will Apple if the patent licensing agreements could be reached amicably. Though Android is distributed by Google freely to device-makers, there appears now to be a hidden tax involved.