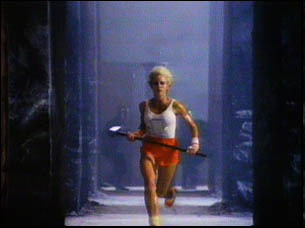 Don’t take this as an rant against Apple. It isn’t. It’s just an acknowledgment that, in my view, Apple has finally and publicly admitted that like all corporate behemoths, it has moved on from the original vision on which it was founded. On Friday, Apple held a public funeral for that original spirit that attracted so many to the company and its products in the first place. The funeral was disguised as a press conference to address the “death grip” issues that plague the iPhone 4. Don’t get me wrong, Apple had thoroughly become the “take no prisoners” corporation it now is quite some time ago. But the press conference was the final shovel full of dirt being tamped on the grave of that whole “think different” thing, even though it was cleverly disguised.

Following the PR playbook, Apple did what it had to do during the press conference. It made good (free Bumpers, no re-stocking fees for returns) and it addressed the issue. But it did so by changing the language around the problem and deflecting those issues with the same deft skill that it creates the hysteria that greets any new Apple product these days. Love ’em or hate ’em, you have to admire the work and effort. After goofing considerably and uncharacteristically  in the initial response to the “death grip” issue, Apple regrouped and came back swinging. Let’s look at a few specifics.

“Antennagate” is now the term for this entire episode. Funny, but there are very, very, very few mentions of “Antennagate” prior to the press conference that I can find. Apple effectively got everyone to move away from the more abundantly used phrase “death grip” by having Steve Jobs repeat “antennagate” over and over. The semiotics attached to that phrase help transfer the scandal away from the actual technology problem and over to the “overblown” coverage. Clever.

“We love our customers.” Whenever a large corporation starts spouting “we love our customers” you know that what they really mean is “we love our shareholders.” Sure, Apple works hard to make “each and every customer happy,” a business can’t survive if it doesn’t. But, the reality here is that Apple, like any other public corporation pushing a product extends that love only as far as it affects the bottom line and market cap.

The problem is an industry problem. That may be true. But Apple has made it more true. Some, (especially the other companies Apple highlighted) are saying Apple is not playing fair here, and to Apple’s benefit, no one is going to reveal their own methods to refute this. This may indeed come back to take another bite out of Apple’s logo, if anyone or any company has the chutzpah to step up and challenge Apple and so it was the riskiest rabbit pulled out of the hat on Friday. But it may also be setting the stage down the road for Apple to continue to say we’re working on fixing the problem and others aren’t. At least the pictures of its super secret testing areas look cooler than anything else anyone else has been willing to show. That was a clever bit of theatrics.

When you’re on top everyone tries to tear you down. I love the sympathy card. Add this to “we love our customers so much we built them Apple Stores” and Steve Jobs was practically begging for an A for effort. The sad fact of life, that Steve Jobs knows all too well, is that once your reach the top of the hill, you’re an easier target than when you’re climbing it. History proves that we love a winner in all walks of life, but only so that we can knock them down a few pegs, and watch them take some knocks. I don’t know why we have this in our makeup, but we do. History, and mythology, also proves that those with too much arrogance someday will take a tumble. Ask Icarus.

Statistics. Apple trotted out some interesting numbers. But, anyone with any sense knows that you can make numbers mean what you want them to. There’s no denying that 3 million units sold is huge. But, if you parse the language on that 0.55% of calls complaining, or the 1.7% of returns, you can bet there are other numbers that didn’t get reported. Do they matter? Who knows. Apple took a moderate risk by saying that it responds to data, but it also gave itself some cover. If the data starts going the wrong way, then Apple can cover any future changes it makes due to this issue buy coming back to this statement. There’s nothing wrong with picking and choosing your numbers and data points. Corporations, governments, the media, etc…. do that all the time. We drink it in at the water cooler, and the numbers become truth.

So, in my view, the event was handled with the consummate skill of a funeral director who has laid many a body to rest. The family can now move on with some closure, even though some nagging questions about how the deceased met an untimely end still exist. But the real impact of this episode won’t be known until Apple’s next product release or a few product releases down the road, when we see if any lingering residue sticks. The telling point will be if journalists and bloggers who get granted access bring up the “antennagate” issue when they probe features of the next big thing Apple unveils. I’m betting that they don’t, as memories are short things. Apple is too.

As for me, I’m basically content with the iPhone 4. The Bumper case, so far, has eliminated my “death grip” issues. The iPhone 4 is a good phone and one that I’m content to use at the moment. It has a flaw, (maybe several) but then most of the other hardware I’ve used in my lifetime has had flaws as well. Since this episode has become such a hot potato, I’ve been shopping around and seriously looking at other options, mostly in the Android vein. I haven’t found anything yet that makes me want to jump platforms, and the reasons for that are the subject of another post or two. I long ago gave up on seeking perfection, just like I long ago gave up on expecting companies to do anything beyond what the PR/Marketing mavens and lawyers tell them to do. In my book, anyone who expects a public company to do anything else, needs to, well… think different. But then that, like all things in the end, was just a passing fad.