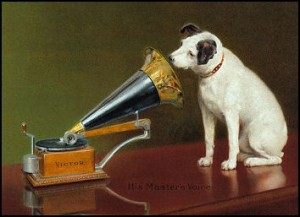 Speech recognition. Some think it is the holy grail of mobile computing. It just makes sense doesn’t it? You’ve got a device that you talk into for phone calls and you should be able to just talk to it and make it do what you want, right? But anyone who has ever looked seriously at this knows it’s a tough nut to crack. Nuance, the makers of the Dragon Naturally Speaking products are considered by many to be the best in class when it comes to this, and now there is speculation out there that Apple may be in talks to purchase Nuance or partner with them for future development of its iOS.

Why is this important? Well, Apple is decidedly behind the eight ball when it comes to voice or speech recognition on its mobile platform, lagging behind Google efforts with Android. Google has lots of folks providing help for it to continue it voice recognition advances using its personalized voice recognition approach via Google Voice and its own voice search system. Essentially, the more you talk, the more Google collects info on how you speak, and supposedly the voice recognition improves. Users can opt in or out of this. Since I don’t own an Android device I can’t say with any qualification how well this works over time. And I’m actually curious as to how many Android users work with voice recognition regularly. (Let us know in comments.) Apple may or may not have been collecting location data (until the recent iOS update) but it hasn’t been collecting voice recognition data.

Like I said, Nuance is considered to be the best in class when it comes to voice recognition software. But when I first read about this I remembered that Apple bought Siri awhile back, and Siri’s personal assistant approach using voice as input was thought to be a big key for Apple’s voice recognition efforts going forward. Well, as it turns out, Siri uses Nuance’s patented technology for its voice recognition. So, it looks like Apple has to dance with Nuance in some fashion whether it wants to or not. Intriguingly, it turns out that a Nuance co-founder is the guy who created Google’s approach.

Apparently, according to the article on TechCrunch the negotiating for whatever this may turn out to be is as tough a nut to crack as is the technology issues, so it is no sure thing, and it certainly isn’t a sure thing for the next version of iOS.