2012 may be a big year for Apple as the company plans to overhaul and offer new designs for its mobile product line, which includes the iPhone smartphone, iPad tablet, and MacBook notebook line. Supplier sources informed DigiTimes of new component and parts orders that would corroborate the claims of new redesigns for 2012.

The re-designed iPhone may be the tear-drop design that was rumored as the iPhone 5. Instead, this Fall, Apple launched an evolved iPhone 4 design known as the iPhone 4S. The iPhone 5 is said to have a larger 4-inch display, a tear-drop unibody construction, and an elongated home button. 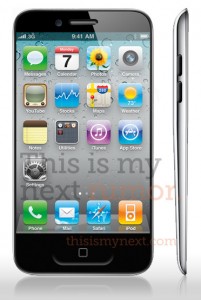 There are recent speculations that Apple’s suppliers may have a difficult time mass producing high-resolution Retina-like Displays for the next iPad, forcing Apple to offer a more modest screen resolution bump.

The most recent MacBook Air rumor suggests that Apple may release a larger 15-inch MacBook Air model to complement the company’s 11-inch and 13-inch models. A 15-inch ultra-portable, ultra-light notebook is still rare in the computer industry as most manufacturers target the 13-inch form factor as having the best combination of weight, power, and mobility.