Apple's Your Verse: Sounds for Those Who Hear and Those Who Don't

Aspirational advertising from Apple is something we’re all accustomed to. In many ways, Apple’s approach to that type of advertising continues to propel interest from different segments of the consumer market. And, it continues the love affair that has long existed between creative types and Apple products. Apple’s Your Verse campaign, in which it shows different ways that individuals are using an iPad in their own work, continues the focus on those who use the iPad as a tool to create with two new stories that Apple released this past weekend. 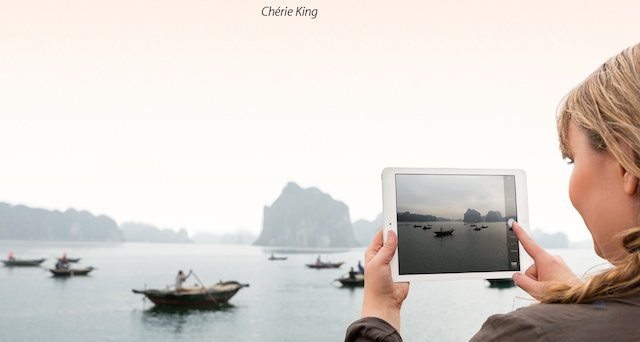 The first new story called Chérie’s Verse tells us about Chérie King, a travel writer who has explored the Amazon River, visited salt mines in Austria, and traveled to over 31 countries on five continents. Here’s the thing. Chérie King has been deaf since childhood. She uses her iPad to help her not only with her travels but to write and communicate about those travels and her experiences.

My iPad lets me share my journey with the world. Other deaf people tell me they are traveling more now because they see it’s possible.

Chérie relies quite a bit on language and translation Apps in addition to travel guides and maps during her travels and her work. This would be an impressive story for a travel writer who did have the benefit of hearing, much less one that is hearing impaired.

You can watch her full story at this link.

The second story Apple highlights is called Esa-Pekka’s Verse and features noted conductor Esa-Pekka Salonen. Salonen has conducted for world class orchestras around the globe and his love and passion for classical music is quite something to behold. He, along with colleagues from the Philharmonia Orchestra in London have created The Orchestra App for the iPad to share some of his passion with others. Designed to bring the joys of classical music to those who don’t yet have an appreciation for it, as well as those who do, the App lets you dive into a piece of music and see what various orchestral sections are doing, rewind to hear a portion of the score again, and also view what various musicians have to say about playing their parts in the pieces of music featured in the App.

I showed the App to one of my nephews who has an interest in playing music earlier this evening and when I left him he was still entranced completely with the experience.

Salonen is also a composer who uses his iPad to capture those random and unexpected moments of inspiration that all artists have so that he can save them and have them available when he is composing.

I have no mantras. I have no strict routines,” he says. Salonen always has his iPad Air on hand to capture what he calls these first impulses of inspiration. He uses the Notion app to write bits and pieces of music — chords, melodies, rhythms. Or sometimes he uses Notes to describe moods and feelings in words that he later translates into music.

You can view Esa-Pekka’s Verse here.

Apple’s Your Verse campaign has been in some ways a direct response to those who think the iPad is merely a consumption device and not a device that can be used for “real work.” The aspirational and often inspirational stories that Apple is choosing to share throughout the campaign offer glimpses into how some individuals are using iPads in very creative ways.

These types of aspirational ads from Apple often hit their emotional mark. But Apple isn’t the only company to use emotion to tell a story about how technology can work in the lives of users. Some readers may recall the Steve Gleason commercial from Microsoft that ran during the most recent Super Bowl.

While the world of advertising, like the world it advertises, is made up of many different moments, stories, and verses from all walks of life, it is always good to see companies take advantage of powerful human stories to highlight their technology and what it makes possible.