Coming off a Double Cryptokey weekend and adding new Black Ops 3 weapons to the mix Treyarch is pushing hard to keep players from drifting to other games like Uncharted 4 with special events and big changes in the May Black Ops 3 update.

Starting on May 10 you will earn Double XP and Double Weapons XP when you play Call of Duty: Black Ops 3 on PS4, Xbox One and PC with at least one other person.

This comes one week ahead of the PC and Xbox One Black Ops 3 DLC 2 release date that will bring new maps and a new zombies experience to the game. 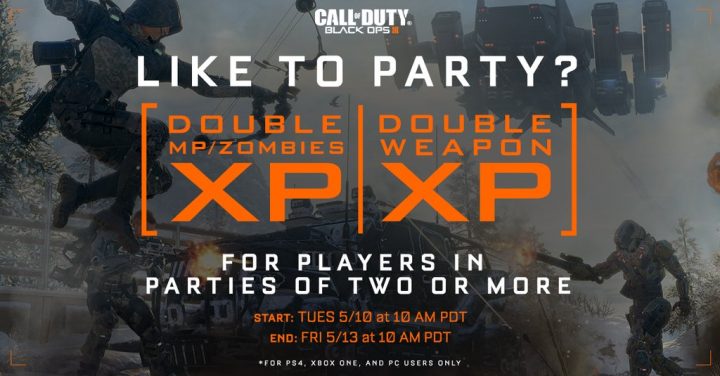 What you need to know about the May Black Ops 3 Double XP and Double Weapon XP event.

During the new Double Double XP event Black Ops 3 players can level up their characters faster and unlock new weapon attachments faster. By combining these you can level up even faster by unlocking challenges for each weapon that also deliver XP that levels up your character.

You can also use this as a chance to hit the 75 wins contract to unlock a Weapons bribe and 10 rare supply drops.

If you’ve been waiting for a chance to finally hit Black Ops 3 Prestige, or for the opportunity to level up the rest of your Black Ops 3 weapons faster, this is an excellent time.

The announcement came earlier in the week than usual. Normally we learn about this on Thursday, but you can finally earn Call of Duty: Black Ops 3 Double XP during the week. .

That’s part of the Black Ops 3 DLC 2 is out on PS4 and coming to Xbox One and PC next week.

If you prioritize and make smart play decisions this week you will be able to level up your weapons faster — allowing you to win more gunfights. You will also level up your player — unlocking new weapon options, score streaks and perks. You’ll also get unlock tokens faster so that you get access to those items and don’t need to be stingy using unlock tokens.

We highly recommend using this list of Call of Duty: Black Ops 3 tips to rank up faster to really push through the levels during the April Black Ops 3 Double XP weekend.

The May Double Double Black Ops 3 week is only on PS4, Xbox One and PC. For more, you can use our Call of Duty: Black Ops 3 guide that walks through our tips to get the most out of the game.

The slides below walk through what’s new in the Eclipse Black Ops 3 DLC 2 map pack.