Amazon’s Kindle Fire may have been the first Android tablet to hit the sub-$200 price range, however, the Kindle Fire runs on a heavily modified version of Google’s Android 2.3 Gingerbread software. Today though, Archos has announced that it is bringing the first sub-$200 tablet running Android Honeycomb 3.2, the version of Android that came after Gingerbread, to shelves at some point in January of 2012 for $199.

Archos calls the tablet the ARCHOS 70b and it is an upgraded version of the company’s Archos 70 tablet.

In addition to the Honeycomb version of Android and discounted price tag, the tablet employs more RAM (512MB) and a faster processor (1.2GHz) then the one that was found on its predecessor. 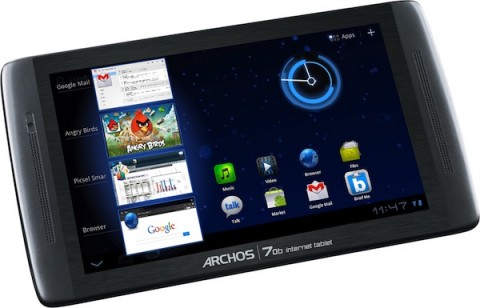 A full specification listing for the Archos 70b looks like this:

• An affordable price starting at $199 for 8GB
• Smoother multi-tasking and a faster web experience thanks to the upgraded RAM
• Brighter colors with a high resolution capacitive screen
• Android 3.2 Honeycomb, the Android version designed for a tablet
• Access to a full array of apps with the Android Market and its 300,000 apps such as news, eMagazines, eBooks, social media, games and more
• A full multimedia experience with upgraded multimedia ARCHOS apps for video and music
• HDMI output, giving users full access to their Android experience on their TV including all the pre-loaded apps, video playback, 3D games, photos and all the Android Market apps

We should see more of this tablet at CES but at the moment, it appears to be something to keep on the radar for those that are looking for a cheap Android tablet.

But will it be good?