Android users looking for a tablet designed for gaming should take note of ARCHOS GamePad, a new 7-inch tablet with built in phsyical game controls which should work with most high-end Android games.

The ARCHOS GamePad delivers hardware game controls on both sides of the screen, including what appears to be two joysticks, a D-Pad and a set of four (X,Y,A,B) buttons.

ARCHOS will ship the GamePad with Android Ice Cream Sandwich, the first Android OS to support controllers on a full scale. a 1.5GHz dual core processor and a Maili 400mp quad-core GPU power the device. 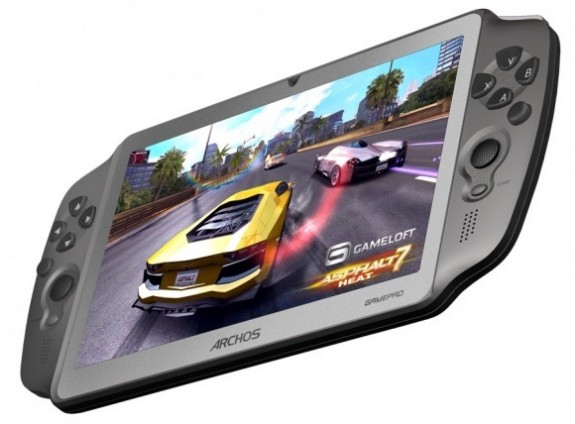 The GamePad isa full Google Tablet, so users will see access to the Google Play store for all the same Androdi Tablet apps available on the Nexus 7 and others.

Games that already support third-party hardware controls should work right out of the box, and ARCHOS says it is working on a solution to virtually control games which don’t yet support hardware controllers. ARCHOS founder Henri Crohas says, “we already have over a thousand android games compatible with the ARCHOS GamePad’s physical controls, including back catalog titles that originally didn’t include physical controls.”

The ARCHOS GamePad should arrive in stores in October with a 150 Euro price. That’s approximately $188, $12 less than the Nexus 7 tablet with 8GB of storage.

There’s no confirmation of a U.S. release date for the GamePad, but if this tablet isn’t perfectly suited to line the shelves of GameStop, I don’t know what is.

We’ll be looking for the ARCHOS GamePad at IFA 2012 in Berlin to see if it lives up to the promise of a better Android gaming experience.