Your smartphone today, such as Motorola’s aptly named Droid Bionic, may share in a lot in common with the artificial limbs and body parts of tomorrow. In fact, development in processors, networking, camera, and sensor technologies used in today’s advanced and high-end phones may be applied to developing artificial legs, bionic eyes, and insulin pumps to improve the quality of life for many.

Take for instance the Vanderbilt leg, developed for seven years at Vanderbilt University, which allows a person to walk with a more natural gait as there’s less lag and dragging involved. The leg has a number of motion sensors, similar to those found on modern phones, plenty of processing power that’s both space and battery efficient, like the ARM chips found on Android, iOS, Windows Phone 7, and BlackBerry devices of today, and good battery life. The same research that allows your smartphone to get through a whole day without recharging is applied to get the Vanderbilt leg to go for three days without a recharge, or about 14 continuous kilometers. 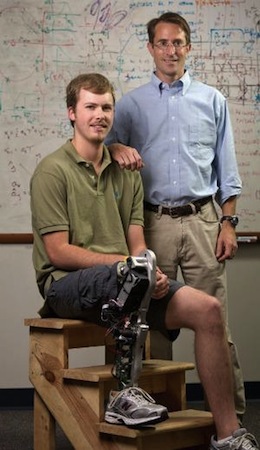 Additionally, as smartphone makers consume more of these technologies and components, like the motion sensors, prices will continue to drop as component manufacturers achieve greater efficiency and economies of scale through increased orders and consumption. This will also help to prosthetics, like the Vanderbilt leg, achieve lower prices than what was previously imaginable.

And with better cameras on smartphones, like the 12-megapixel shooter on the Nokia N8, we’re beginning to see a world where vision can be enabled in artificial eyes. Advanced autofocusing capabilities, small chip and sensor designs, and high resolution image capture will help bio-tech researchers create an artificial eyeball and fit all the vision-sensing capabilities into a tight, confined space.

Add to that wireless networking capabilities and we will soon have smarter artificial limbs and organs that will continue to sense and doctors can continue to monitor them for irregularities. Best of all, patients can now become an active part in their care with the ability to track and monitor their treatments and how their bodies work, rather than be a passive observer.

At the end of the day, as a technology enthusiast, it’s really fascinating to see that the smartphones that many of us carry today can potentially lead to meaningful impact for others beyond just voice and data communications. We’ve heard of patient monitoring via wireless networks before, but it’s astounding that the sensors, processors, batteries, and cameras in our phones are capable of so much more.