ASUS brought a few of its Android devices to Milan Design Week 2012 to show them off and to announce pricing and availability in Europe. At the event ASUS talked about the upcoming Padfone, Transformer Pad Infinity 700, and Pad Transformer TF300.

According to Notebook Italia, ASUS announced the Padfone will be available in Italy at the end of May. The carrier and pricing for the phone wasn’t announced. However, ASUS did say the Android phone along with the Padfone Station 32GB will be available for €699. That’s roughly $920 in the US, which seems steep for a phone and its tablet docking station.

The Padfone Dock, the keyboard dock for the tablet (which is only functional with the Padfone phone inserted) will cost €149, which is about $195. It’s more likely that US customers will have to pay $149, however. That’s how much ASUS charges for the Transformer Prime keyboard dock. 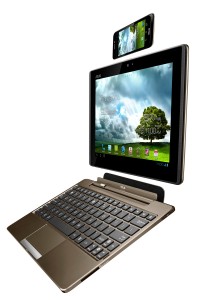 ASUS did give an exact release date and price for the Transformer Pad Infinity. The 64GB WiFi-only Android tablet will be on sale in Italy on June 10 for €599. That converts to about $785, though will likely be closer to $599 in the US.

ASUS sells the Transformer Prime with keyboard dock for €599 in Italy, with the same model sans keyboard priced at $499 in the US. Theoretically that means ASUS has no problem keeping the numbers the same on pricing while charging Europeans more due to the exchange rate.

The keyboard dock will sell separately for an unknown price, but could cost the same as the Padfone Dock.

With the devices coming to Europe in the coming months, hopefully they will come to the US soon after. We can’t wait to see how well the ASUS Padfone works as a phone and a tablet.