ASUS’s Eee Pad Transformer has landed on Best Buy’s website and the retail outlet lists the device as ‘coming soon’ with a price tag of $399. 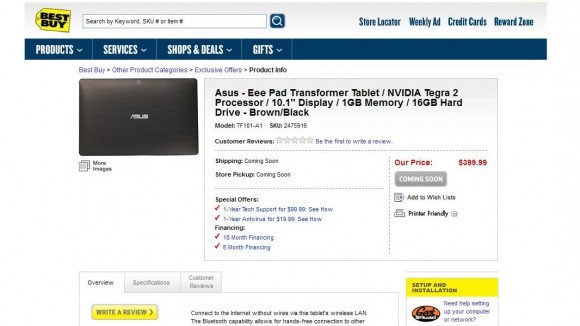 This of course comes after yesterday when the Eee Pad Transformer finally got official pricing and a release date for the United Kingdom with the Tegra 2 powered tablet scheduled for launch on April 6th for a price tag of £379.

Now that Best Buy has this up, an official announcement regarding a U.S. price and release date should be coming at some point in the very near future.

The Eee Pad will also be compatible with a optional keyboard docking station that will allow the user to turn the device into a PC-like device.

For more, check out our Eee Pad Transfomer Notebook and Tablet coverage at Notebooks.

If Best Buy’s listing for $400 is indeed real, and is not a placeholder, than the Eee Pad will be an extremely attractive offering at that price point with it being far under the prices of the iPad 2 and the Motorola Xoom.