At the AsiaD conference, Asus head Jonney Shih finally fessed up about the company’s next generation Asus Eee Pad Transformer successor, in which Shih calls the Transformer Prime. The device, like the Google smartphone called the Galaxy Nexus by Samsung, will run on the next-generation Android Ice Cream Sandwich platform, which will be the first version of Android to marry smartphone and tablet OSes into one unified Android OS. Interestingly, the Galaxy Nexus was originally rumored to be called the Nexus Prime, and the ‘Prime’ moniker now is being adopted by Asus with its Ice Cream Sandwich-powered Transformer Prime tablet. 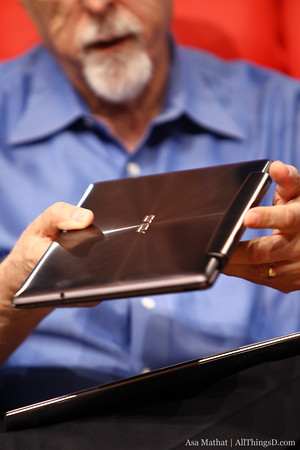 Like earlier rumors, we now know that the Transformer Prime, like its predecessor, will sport a 10-inch capacitive touchscreen. However, the internals have been improved and the Transformer Prime will go with a quad-core CPU from NVIDIA’s Tegra lineup, codenamed Kal-el, which will be a bump from the dual-core Tegra 2 CPU on today’s model.

The Transformer Prime will come with a laptop dock, which will dock with a trackpad and keyboard where the tablet itself will provide the display in a hardware configuration similar to todays’ laptops. With Asus now venturing into the ultrabook category that’s being dominated by the MacBook Air from Apple, the Transformer Prime’s outer shell will resemble Asus’s Zenbook ultrabook. The Transformer Prime will come in at just 8.33 mm of thinness. But unlike other consumer-grade tablets, like the Samsung Galaxy Tab series, Asus’s model will pack in mini HDMI port, some USB ports, and a full size SD card reader.

Additionally, speaking to Walt Mossberg, Shih also hinted that the company’s netbooks will also get a revamped design, possibly to follow in line with the Zenbook design philosophy.

When is the new Prime landing? Shih says end of the year.