A new leak from Tablets Magazine details the specs on the upcoming Asus MeMO Pad 10 tablet.

The Asus MeMO Pad 10 is the larger version of the Eee Pad MeMO that Asus and NVIDIA discussed at CES 2013. While the Pad 10 is larger than the 7-inch tablet, it has some fairly similar specs according to the leak.

The leaked specs say the Asus MeMO Pad 10 will have a 10-inch 1280×800 display, which is the same resolution as the Nexus 7, but in a larger screen. The MeMO Pad 10 will use a quad-core 1.2GHz Tegra 3 processor like the Eee Pad MeMO, which will likely make the 10-inch tablet a budget tablet for its size. 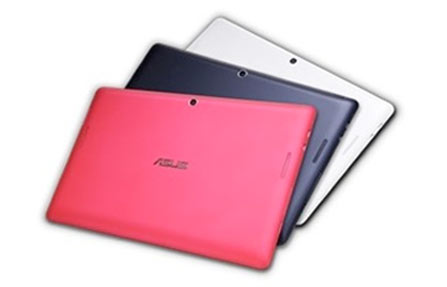 The Asus MeMO Pad 10 will run Android 4.1 Jelly Bean, likely with a custom skin on top of it. The leak also suggests the tablet will have 16GB of internal storage, a 1.2MP front-facing camera, a 5MP rear-facing camera and 1GB of RAM.

To make the tablet stand out Asus will offer the MeMO Pad 10 in a variety of colors, according to the leaked information. The leak claims the tablet will come in gray/blue, pink and white. Gray and white are typical colors for mobile devices, but it’s relatively rare to see a pink tablet or smartphone.

There’s no word on pricing or a release date for the 10-inch Android tablet. Tablets Magazine speculates that Asus will announce the MeMO Pad 10 at Mobile World Congress in Barcelona next month, which seems like a natural place for the announcement.

The Dutch publication also speculates that Asus could charge 300 Euros for the tablet, which translates to U.S. $399. The Eee Pad MeMO will cost $249 in the U.S., which is slightly more than the Nexus 7. It’s hard to imagine the MeMO Pad 10 selling for the same price as the Nexus 10, which has better specs all around.