Asus, which has made a name for itself by exploring hybrid, convertible form factors in mobile with the Transformer Pad series (nee Eee Pad Transformer) and brought the same transforming sleekness to the phone and tablet with the much delayed first-generation Padfone. It looks like the company is committed to that form factor and Asus has already begun to send out media invitations to an event in Taiwan where Padfone 2 is clearly listed as the theme of the announcement according to a report on Netbook Italia. 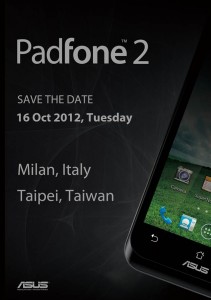 The Padfone had debuted at a time when data was costly and major carriers like AT&T Mobility and Verizon Wireless did not offer Mobile Shared Plans or Share Everything Plans. As such, there was a lot of interest in the Padfone as at the core, the device is a smartphone. Docked into a tablet display and it powers a tablet. When the tablet is docked with a keyboard, it becomes a notebook-like device. All the information, data, and Internet connectivity is routed through the phone unit and the tablet display and the keyboard are essentially ‘dumb accessories’ that only come to life when the smartphone portion is inserted and docked.

However, since the Padfone debuted, carriers have enabled users the ability to share their data between different devices. These plans allow customers to purchase one data bucket and add a small fee to their monthly bills to share the data between different devices, whether that’s another smartphone, a netbook, a mobile hotspot, or a tablet. These sharable plans do allow customers flexibility and are more affordable than getting individual data plans for each device owned. The downside is that sharing marks the end of unlimited at these big national carriers. As such, the concept of a hybrid, modular, docking smartphone-tablet-netbook may become redundant, especially since the cost of ownership of such a device is high.

The idea is cool, but so far, Asus has not been able to get its Padfone into any U.S. carrier‘s lineup. We’ll have to see what will change with Padfone 2 and if Asus can make inroads in a competitive U.S. market.