Announced today during the company’s Computex 2013 event, the device will allow users to run Microsoft’s Windows 8 and Google’s Android Jelly Bean operating system. Essentially, the device’s 11.6 display with a resolution of 1920 x 1080 is actually a detachable tablet with its own ARM processor, Intel Atom processor and a 64GB SSD. 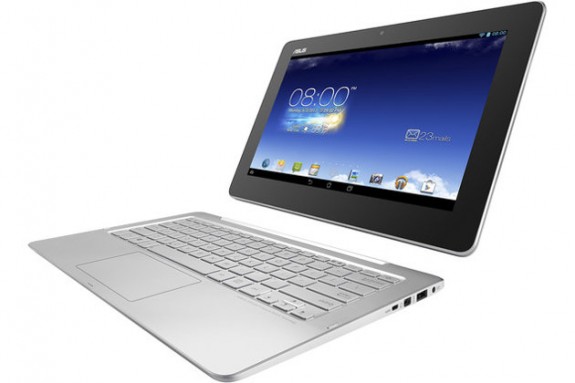 Once that tablet/display is docked to a laptop style keyboard, an Intel Core i7 Haswell processor kicks in and allows users to run their favorite Windows-based Desktop applications for “15 hours”, according to The Verge and Asus. Inside that dock users will also be greeted by a spacious 750 GB hard drive.

While Asus hasn’t been forthcoming on when users can expect to be able to pick up an Asus Transformer Book Trio, the fact the company is preparing to release a machine of this type indicates that at least some executives in the company are convinced that some users might prefer to only work in Windows 8 and enjoy their free time in Android.

True, this isn’t the first time the company has done this. During CES 2013, Asus announced that it would be releasing the Transformer P1801. That tablet featured an 18.5 inch display with a battery that allowed users to take that huge tablet with them.

The tablet’s ARM processor with Android should deliver seriously extended battery life, while using Windows 8 with the built-in Intel ATOM processor will do the same, but still allow users to open things like iTunes. Finally for those who need it, the newly updated Intel Core i7 Haswell processor should deliver great performance for gaming and desktop productivity while still taking advantage of that processor’s better battery management.