Those looking to get the Asus Transformer Pad Infinity a couple of days before its official release will want to head on over to Office Depot which currently has the tablet available for purchase this very minute.

Last we heard, the Transformer Pad Infinity would be hitting the United States during the week of July 16th. Spotted by Engadget, it appears that Office Depot has jumped the gun and the device is currently available for purchase through its website.

The Transformer Pad Infinity is currently listed as “In Stock” and Office Depot says that those who order should expect the device to arrive within 3-5 days. 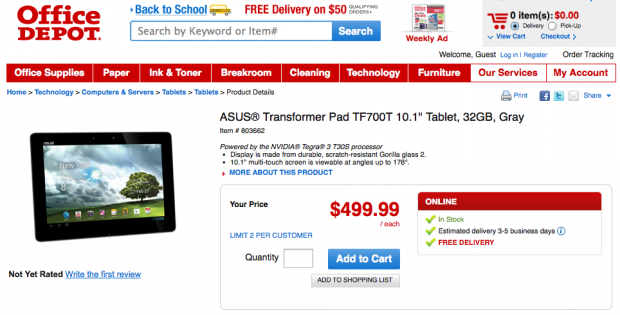 As far as we know, Asus hasn’t confirmed anything yet and it doesn’t appear as though any other retailers are currently offering the device.

The device had appeared on Best Buy’s website back in June but it vanished soon afterward.

The 4G LTE enabled Transformer Pad Infinity will be launching later this year, although the exact release date of that device has not yet been revealed.

The Asus Transformer Pad is going to be an improvement over Asus’  Transformer Prime tablet, a quad-core tablet that launched last year.

A video showing off the power of Gorilla Glass 2 can be seen below.

It’ll also sport a slim 8.5mm design, a 2MP front camera for video chat, and an 8MP rear camera with a large F2.2 aperture, 5-element lens and LED flash. Android 4.0 Ice Cream Sandwich will be the operating system on board and it will be powered by NVIDIA’s quad-core Tegra 3 processor.

Now that the device has popped up at Office Depot, we assume that other retailers will follow suit and offer the highly anticipated Transformer Pad Infinity soon.