Asus is going to be officially introducing its Eee Pad Transformer Prime later on this month but that doesn’t mean that information about the upcoming Honeycomb tablet isn’t coming to the surface. Today, benchmarks for the NVIDIA Tegra 3 powered tablet emerged showing off just how fast the device’s quad-core chip is.

As you can see from these scores taken from the AnTuTu benchmarking app, Transformer Prime blows away its dual-core competition by a mile. That is no exaggeration either. Of course, it would have been nice to see it pitted against some other tablets as the Moto Xoom, which sits about midway down the list, is the Transformer’s only competition here. 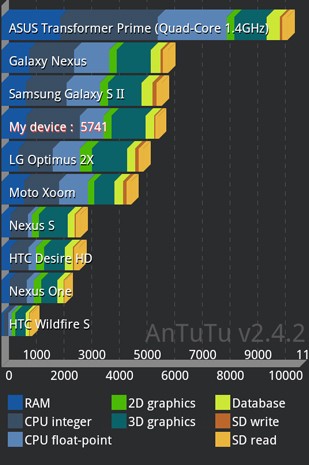 And while these benchmarks are certainly impressive, we’re anxious to see just how this bad boy operates in the wild, especially when it gets the upgrade to Android 4.0 Ice Cream Sandwich.

Anyone going to be making the Transformer Prime their next tablet?