AT&T, which has in the past prevented users from sideloading apps, or installing apps not obtained from Android Market, on their Android smartphone, is now enabling the feature on a few more devices since the launch of the Samsung Infuse 4G. The benefit to this is that users can browse other app stores and download apps not found on Android Market, or even test out apps from developers. This means that users can now download and install the competing Amazon Appstore for Android app, and apps downloaded through that app store. 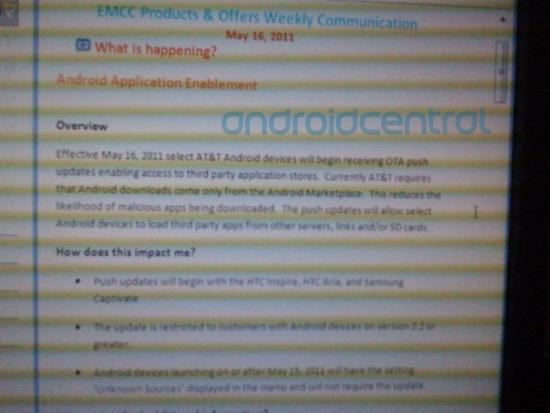 Unfortunately though, AT&T is only slowly rolling out the update. The update to enable sideloading will only be enabled on the HTC Inspire 4G, the HTC Aria, and the Smasung Captivate, which is a variant of the Samsung Galaxy S smartphone for the carrier. The Motorola Atrix 4G, unfortunately, isn’t supported, though hopefully will be soon in the future.