Samsung seems to think that the AT&T Galaxy Note 2 already has access to the Android 4.3 Jelly Bean update. That, as we know, isn’t true. However, the listing on Samsung’s website is a good sign that a Samsung Galaxy Note 2 Android 4.3 update for AT&T users is now closer than ever and could roll out in the imminent future.

Several weeks ago, a leaked Android 4.3 update schedule leaked out, presenting possible release dates for owners of the Galaxy S4, Galaxy S3 and Galaxy Note 2 in the United States. Some of those dates have been dead on accurate, others, haven’t been. Yesterday, we were supposed to see two Galaxy Note 2 Android 4.3 updates announced in the United States and sadly, we only saw Sprint announce its Galaxy Note 2 update. AT&T, the other carrier that was rumored to have something for users, remained silent.

Anticipation is high and AT&T Galaxy Note 2 owners are likely looking for answers. And while there is no concrete date set in stone anymore, it does look like the update might roll out in the not-so-distant future.

Samsung’s website shows the AT&T Galaxy Note 2 as running Android 4.3 Jelly Bean, an operating system that the device currently does not operate. Thanks to a cached version of the website, we know that this change was made very recently. We imagine the change could have been made based on yesterday’s presumed roll out date only to see the update delayed.

While we can’t say for sure, we do take this as a sign that something is close for AT&T Galaxy Note 2 owners. It could be today, it could be tomorrow, it could be in a few days but Android 4.3 Jelly Bean is on the way. This is also the first confirmation that we’ve seen out of Samsung, even though we’ve known that the update is coming. 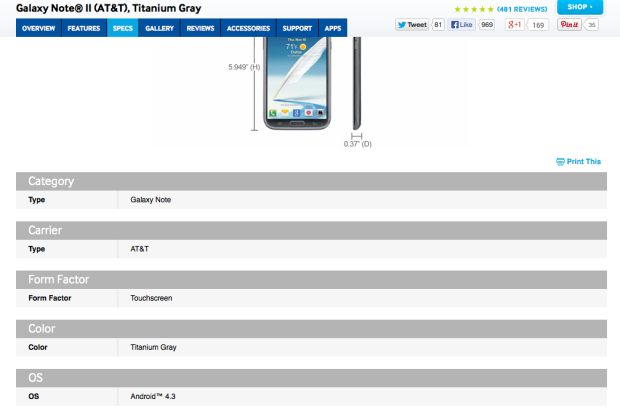 The next rumored Galaxy Note 2 release date is for Verizon, an update that is supposedly going to start rolling out on November 29th, or, Black Friday. That hasn’t been confirmed by Verizon and it will be interesting to see if Verizon also misses its presumed release date. We’ve seen at least one carrier outside the US delay its upgrade, so, it’s possible that we could see some further delays in the U.S.

The Samsung Galaxy Note 2 Android 4.3 update is, in fact, rolling out in other parts of the world and the update is delivering much anticipated Galaxy Gear support, Samsung KNOX and a host of other enhancements and fixes. The update, believe it or not, represents the Galaxy Note 2’s first major Android update.