For the past few months. Rogers have been updating its Android 4.1 roll out schedule for several of its devices including the Samsung Galaxy Note. Previously, Rogers has listed the Galaxy Note as getting Jelly Bean in January and late February and once again the carrier has shifted the date around. However, this time, it may actually turn out to be true as the Galaxy Note Jelly Bean update has finally arrived. 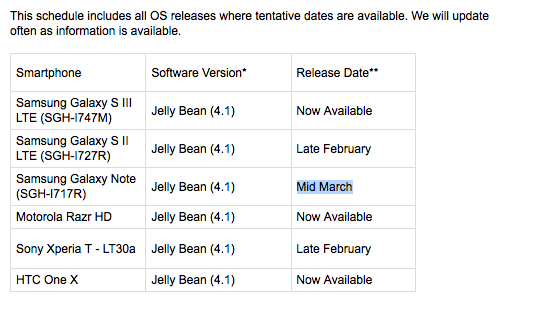 Earlier in the month, Samsung started pushing the Galaxy Note Jelly Bean update to the international version of the device. Samsung had originally promised the update “soon” after the launch of the Galaxy Note 2 back in August.

So, it could be that Rogers finally sticks to its guns here which is something that bodes extremely well for AT&T Galaxy Note owners. While the HTC One X Jelly Bean roll outs did not mirror each other, Rogers rolled its update out several weeks ago while AT&T still has yet to produce the update, past Samsung updates have all lined up with each other.

And finally, the Galaxy S II Ice Cream Sandwich updates which AT&T pushed out on June 25th and Rogers made available on June 20th. AT&T’s originally arrived on June 22nd but was delayed a few days due to issues.

This is certainly not any sort of confirmation for AT&T Galaxy Note owners, but it is a sign that we could see the update roll out in the month of March given the past and given Rogers’ current timing.

At the very least, owners of the Rogers Galaxy Note look like they will be receiving Jelly Bean next month.