AT&T has begun informing customers who pre-ordered the Samsung Galaxy S4 that their devices will arrive earlier than expected with an arrival slated for April 25th, at the earliest. AT&T has also finally confirmed a specific release date saying that the the Samsung Galaxy S4 will be in-stores on April 27th.

Gotta Be Mobile has learned that the AT&T Galaxy S4 will be shipping out to Premier Customers for arrival as soon as April 25th. That means, that with two day shipping, the device should start shipping out tomorrow. AT&T also says that anyone who pre-ordered the device before 9AM today could receive their shipment by April 25th though we suspect Premier Customers will be first in line. 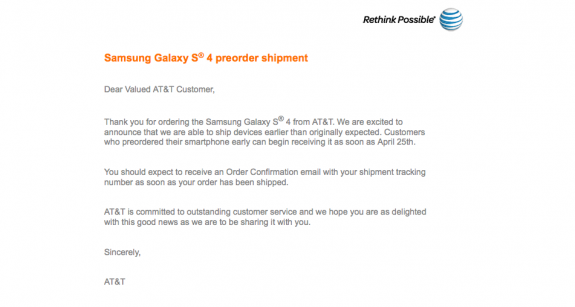 In addition, the carrier has confirmed the Galaxy S4 release date in-stores. AT&T says the Galaxy S4 in-store release date for April 27th, the same date that Sprint will be releasing the Galaxy S4. This is a different date than the April 24th, April 26th and May 3rd date that we had been hearing but it does lend credence to our earlier report that stated that AT&T had, up until today, been undecided on a date.

Oddly enough, the 32GB AT&T Galaxy S4 model remains unconfirmed for arrival with it remaining without a pre-order and without an official release date. The April 27th date apparently pertains to the 16GB model only and the carrier still hasn’t added the 32GB model to its website. AT&T has told us that there is still no official info for the 32GB model, unfortunately.

This finally clears up some of the mysteries revolving around the AT&T Galaxy S4 which originally went up for pre-order on April 16th. Since that arrival, the device has been subject to much confusion with the carrier issuing what appeared to be several different shipping dates and customer service representatives confusing customers even further.

The Samsung Galaxy S4 will be AT&T’s replacement for the Galaxy S3 and it will bring a 5-inch display, 13MP camera, quad-core processor, Android 4.2 Jelly Bean and Samsung smart software features.