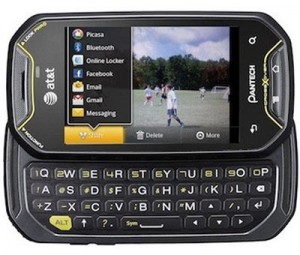 AT&T will be joining rivals Sprint, T-Mobile USA, and Verizon Wireless in offering a rugged Android smartphone in the form of the Pantech Crossover, slated for debut on June 5th according to the company’s press release. The device was seen previously with little information going through the FCC for certification, and now we know it’s a more rugged handset that comes with a landscape-oriented sliding form factor that keeps up with users’ active lifestyles.

The $70 smartphone–with a two-yaer service agreement through AT&T will come with an AllSport GPS to track your workout. Geared at the mid-range market, it will launch with a 600 MHz applications processor–high end phones today are either launching with single- or dual-core 1 GHz CPUs–a 3.1-inch display, Android 2.2, and also a 3-megapixel camera. Though rugged, it’s unclear if this phone passes military specs for ruggedness like the Sprint Nextel Motorola i1 on the iDEN network.

The phone will compete in the same market segment as the Motorola i1 mentioned, the Motorola Defy on T-Mobile, and the newly launched Casio G’zOne Android smartphones. In addition to basic Android functionality, users can also tether via the mobile hotspot app–with the appropriate data plan–on the Crossover on AT&T’s network.