While the AT&T HTC One may not be making it to virtual and online shelves until April 19th, it appears that some of those that pre-ordered the HTC One through AT&T may get their device early as shipments are now on the way to some customers who placed a pre-order for HTC’s latest and greatest Android smartphone.

Read: AT&T HTC One Bootloader Unlocked Ahead of Release.

In early April, AT&T started taking pre-orders for the HTC One, offering up the 32GB for $199.99 on-contract and the exclusive 64GB HTC One for a much more expensive $299.99 on-contract. On the pre-order page, the carrier said that it would be shipping out pre-orders on April 16th, a claim that is still listed on the carrier’s website. As we have found out, for some, it appears that their shipments have gone out early ahead of an delivery dates ahead of its official release date.

AT&T HTC One orders will arrive as early as tomorrow.

On Sunday, at least some of those that pre-ordered the HTC One received a notice from AT&T telling them that their 32GB HTC One had shipped out. Tracking information was not immediately available but now, thanks to USPS, we know when some customers might be getting their device.

It appears that some AT&T HTC One deliveries are expected to arrive as early as tomorrow, April 17th, exactly two days before the AT&T HTC One arrives in stores and on virtual shelves. Of course, this is an expected delivery date, so it’s possible that it could change, but we’ve seen devices arrive ahead of schedule in the past so it’s possible that we could see some HTC One deliveries arrive on doorsteps tomorrow.

At the moment, it doesn’t appear as though everyone who pre-ordered has been as lucky. While the first person ordered on April 4th, another pre-order, placed on April 11th for a 64GB HTC One, still is processing and has not shipped out yet, despite AT&T’s website saying that pre-orders placed today would ship out today. 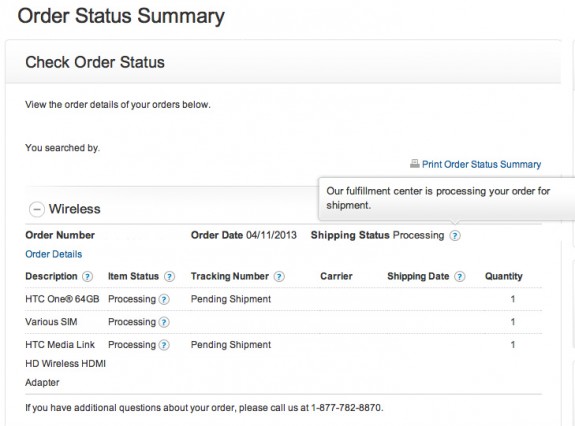 Some AT&T HTC One pre-orders are still processing.

The day is not yet over and website’s have a notorious track record for being slow to update so it could be that that order status changes before the day is over, but at this point, it appears that not all pre-orderers should expect their device to arrive tomorrow.

The HTC One is HTC’s brand new Android smartphone and it will be the company’s rival to the Samsung Galaxy S4 which went up for pre-order today at AT&T.