The long-awaited AT&T HTC One X Android 4.1 Jelly Bean update is now rolling out to owners of the device, despite the confusion that AT&T generated earlier in regards to the update.

We have heard from several owners of the HTC One X on AT&T who say that the HTC One X Android 4.1 Jelly Bean update is indeed rolling out today despite AT&T posting and subsequently removing a blog post that detailed the update.

AT&T has confirmed to Gotta Be Mobile that the HTC One X Jelly Bean update is now rolling out to owners and that owners will want to manually check to see if the update is installed. 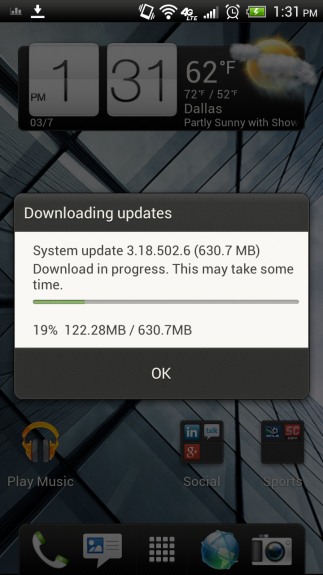 That post has also now returned and thanks to One X owners, we now know that the update is still rolling out to the AT&T One X in the form of a large 600MB+ update that owners in various parts of the country have been able to pull. Those who have seen the update seem to have all checked manually for the update and once that was done, the update relayed a prompt and the software began to download.

Owners can do this by selecting ‘Applications’, ‘Settings’, ‘About phone’ and ‘Check for Updates’. If the update is available, the software should begin to download and install. Owners should set aside several minutes for the update to complete. Once it does, the HTC One X will be taken from Android 4.0 Ice Cream Sandwich to Android 4.1 Jelly Bean. The update will include a number of new features including:

The AT&T HTC One X is one of the last variants of the One X to get the Jelly Bean update. The international One X has been on Jelly Bean since October while various carriers around the globe treated their customers to Jelly Bean weeks ago.

AT&T’s One X Jelly Bean roll out comes shortly before the carrier releases the One X’s successor, the HTC One, a device that is said to be arriving as soon as March 22nd.

Thanks for the image, Chris!