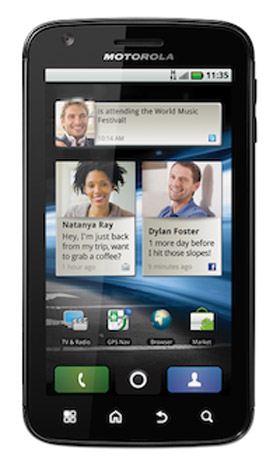 UI as shown from pre-update

Motorola and AT&T are now unleashing the Android 2.3 Gingerbread update for the dual-core Atrix 4G. The HSPA+ smartphone can now decode 1080p video files, though those videos will be played at scaled down resolution on the phone itself as the 4-inch qHD display of the Atrix can only support 960 X 540 pixels.

The phone now supports a new version of the MOTO BLUR UI, similar to that found on Motorola’s recently release of the Motorola Droid 3 on Verizon Wireless, which adds an app dock at the bottom of the display, and refinements throughout the Android OS. Users can now clear out individual notifications and select more online sources to include in the Gallery app. The Webtop browsing, when docked to the multimedia dock or the laptop dock, is also said to be faster.

The download can be transferred over USB or is also available over the air on the phone itself.