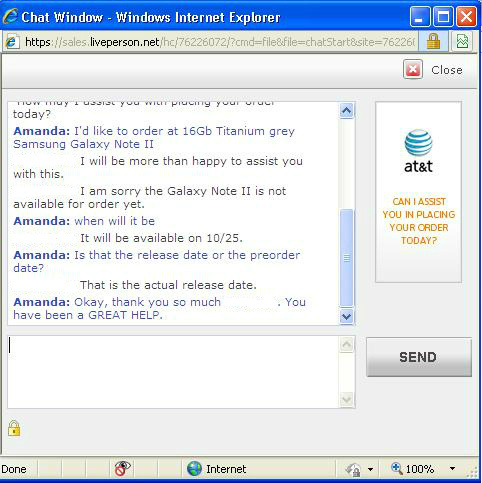 An AT&T rep says the Galaxy Note 2 will arrive on October 25th.

October 25th isn’t out of the question as that is the same date that Sprint will be releasing the Galaxy Note 2 on its 4G LTE network. In addition, it looks like T-Mobile is gearing up for a release on October 24th, the same day that Samsung is hosting a Galaxy Note 2 launch event in New York City that will see Kanye West perform.

Previously, we had thought that AT&T might release the phone in November given that it said the LG Optimus G, which launches on November 2nd, would be its first smartphone with 4G LTE and quad-core processor but right now, it’s looking like that may have either been a mistake or it meant that it was the first one to be announced, not released.

Thus far, Sprint is the only carrier to announce an official release date for the Galaxy Note 2 which it, like U.S Cellular and T-Mobile, will be selling for $299.99 on-contract.