Though 4G LTE delivers blazing fast Internet upload and download speeds on AT&T’s U.S. network, the problem with owning a 4G LTE device is that battery life is a bit shortened due to the 4G radio being a little more power-hungry than last generation’s HSPA+ or even HSPA 3G modems. The Samsung Galaxy S III smartphone is no exception. Fortunately, for AT&T customers, AT&T uses both 4G HSPA+ and 4G LTE technologies on its network and its latest LTE smartphones support both protocols.

HSPA+ delivers good and acceptable performance and is a bit more power conservative, but AT&T is forcing customers in LTE coverage areas to use LTE. The reason is that LTE is more efficient in handling data and causes less network strain. Customers who are concerned with battery life can switch to HSPA+ if they accept a small hit in speed.

To do this, users can either download an LTE toggle app/widget from the Google Play Store, or they can configure the settings manually in the Android settings menu. 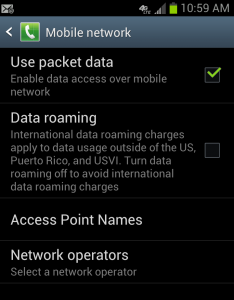 If you want to configure the Android settings yourself, here’s how to do it:

It will take a while for the mobile network kick in, but if you’re under HSPA+, you’ll notice the 4G icon on the top Android status bar won’t show LTE in it.

I averaged between 3-5 Mbps on the download side and about 1 Mbps on the upload side with 4G HSPA+, which sounds considerably slower than the 10-30 Mbps download and 3-10 Mbps upload speeds on AT&T’s 4G HSPA+ network. However, these speeds are fast enough to stream music and videos, surf the web comfortably, and check emails and social network feeds. If you’re uploading an HD video file to YouTube, Flickr, or other sites, you may want to switch back to LTE as the upload speeds are much faster on LTE. 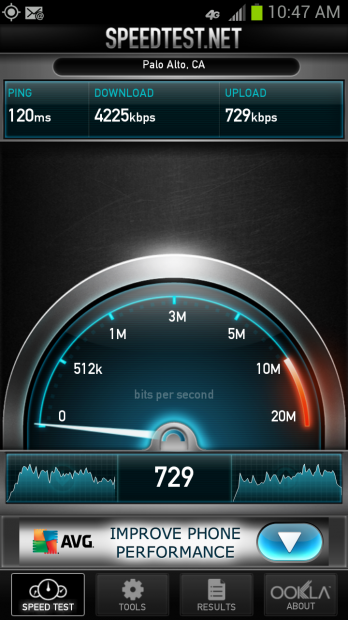 AT&T's HSPA+ network does well, though not quite as fast as AT&T 4G LTE or T-Mobile HSPA+ speeds

Considering that AT&T’s fast fiber home Uverse service starts at 3 Mbps on the download side, the network’s mobile HSPA+ data matches those basic speeds, which is quite impressive once you think how far mobile networks have gone to catch up to home and wired services. 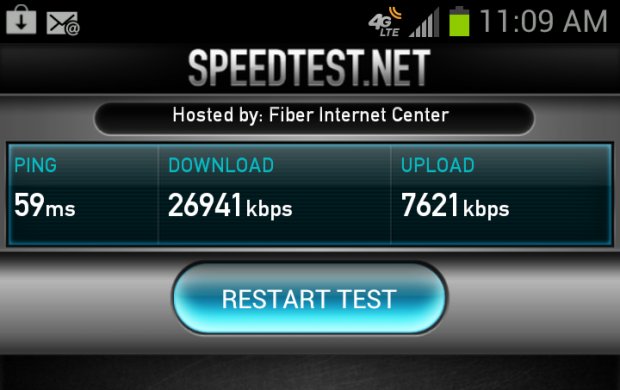 Of note, however, is that T-Mobile uses a faster HSPA+ network with lower latency compared to AT&T’s HSPA+ implementation. However, you should do okay on AT&T’s HSPA+ speeds unless you’re concerned about playing MMO games, which requires lower latency.