At CES 2012, we got to spend some time with Sony and check out the Sony XPERIA Ion smartphone, which is destined for AT&T’s 4G LTE network. While the phone is 4G compatible, it could also be used on GSM/GPRS/EDGE/UMTS/HSPA/HSPA+ networks as well where LTE isn’t yet available on AT&T.

The device retains Sony Ericsson’s signature human curvature back that will enable users to grip the device comfortably in their hands. 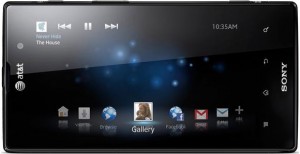 The device does come with an HDMI port so you can connect it to an HD dock to bring up a special UI that will allow you to view and browse your contents on a larger HDTV. 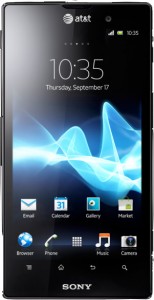 Additionally, Sony has implemented NFC on the device to help save consumers times. Lime Motorola’s smart actions, users can place programmable NFC tags in their cars, home, office, or other location. For example, walk into your house and scan your NFC home tag, and the phone can turn on WiFi, turn off GPS, and silence your phone’s ringer all in one automated step. Tag the phone to the programmed NFC tag placed inside your car, and the phone will turn on your GPS, turn up the volume, and turn off WiFi.

The cool part about this phone is that it has a very nice 12-megapixel camera. You can go from having the phone off to snapping an image in 1.5 seconds by just pressing down on the dual-stage camera shutter button. The camera will automatically focus and capture a 12-megapixel image in just 1.5 seconds so there’s no lag, delay, or chance that you’ll miss out on capturing a good moment.

Pricing and availability has not yet been announced, except that the phone’s headed to AT&T in the second quarter. The XPERIA Ion is a variant of the XPERIA S, but has a larger 4.6-inch 720p HD Bravia Engine display, rather than a smaller 4.3-inch screen of same resolution. Additionally, Sony opted for a metal back on the Ion rather than the plastic rear on the XPERIA S.