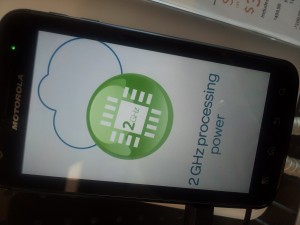 I had recently stopped by an AT&T corporate-owned retail store to check out the recent crop of phones and accessories, and on my visit I found that most of AT&T’s Android-based smartphone come pre-loaded with a looping video tutorial that highlights the features of the devices; when a user interacts with the phone and touches the touchscreen, the promotional video goes away to let the user demo the device. One particular feature on the Atrix 4G found on two different video clips was puzzling to me, and could be construed as misleading. On its promotional video, AT&T highlights that the Atrix 4G, made by Motorola, has a ‘2 GHz processor.’ On one segment of the clip, the carrier highlights that there is ‘2 GHz processing power’ under an image of a chip with ‘2 GHz’ written on it. On another clip, with the same imagery, AT&T says ‘dual core,’ which can be construed to mean that the Atrix 4G has a 2 GHz dual-core CPU while the former clip could suggest that the device has a singular 2 GHz CPU core.

In reality, the Motorola Atrix 4G has a 1 GHz dual-core CPU made by NVIDIA with the chip-maker’s GeForce graphics engine.

Is AT&T’s marketing just overly aggressive? Or is it misleading? Considering that many wireless consumers don’t know the difference between a 1 GHz single-core and 1 GHz dual-core CPU, hearing 2 GHz and dual-core in the same sentence makes the device already sound a whole lot better than rival devices, like the T-Mobile G2x or even the Motorola Droid Bionic when it launches. Though Motorola refuses to confirm that it’s 1 GHz dual-core CPU on the Droid Bionic is made by NVIDIA, a recent conversation that I had with NVIDIA representatives at CTIA confirms that the Droid Bionic will indeed be utilizing the same Tegra 2 CPU as the Atrix 4G and the Motorola Xoom tablet.

I’ve been disappointed by AT&T’s overly aggressive 4G network claims, especially since its HSPA+ network–San Francisco, California is designated as a 4G HSPA+ coverage zone on AT&T’s map–provides me with slower download and upload speeds than my AT&T 3G-capable iPhone 4. The network speeds follow my criticism of AT&T’s device pricing.