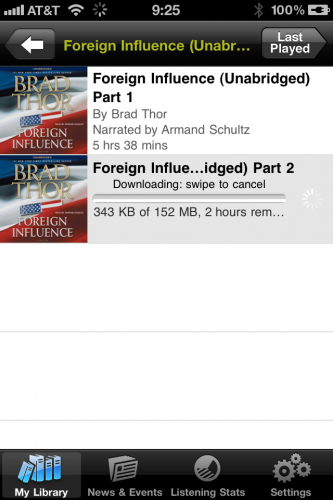 I’m an Audible.com fan. I like to listen to audio books when I’m driving. I’ve been a member of Audible for quite some time and actually listening to audio books is one thing that makes driving to and fro occasionally something I look forward to. Audible’s selections of books keeps increasing as does my library and my wish list. Up to now I’ve been content to listen to these books on either an iPhone or iPod touch while driving, but now Audible has released an App for those platforms, following its recent release of an App for the Android platform. There is also an App for the Blackberry platform.

On the one hand I’m glad to see this, on the other I’m not sure I personally need it, since I can get basically the same audio experience from iTunes. That said, Audible has added some bells and social feature whistles to the App to potentially lift it above the iTunes experience. Most of those social features don’t fit in to my usage, but that may be different for you.There are some nice navigation and control features that do raise this above the iTunes experience, including button-less touch controls (tap the screen to play or pause, swipe left to rewind 30 seconds, right to fast forward, swipe up to add a bookmark.)

In early and very limited testing, the app works as advertised, mostly. It will play in the background on an iOS4 iDevice, which is a plus. At the moment you can’t purchase books from within the App, instead having to do so in Safari or on your computer. (Audible gives us the increasingly familiar refrain that this feature is coming in the next update.) Once purchased all the books in your library on Audible’s servers show up, so you can download them (but only using WiFi if the book is over 20MB) to the Audible App for playback. Here’s where there is a glitch. The heavily compressed audio files take quite some time to download. Far too long in my opinion. At 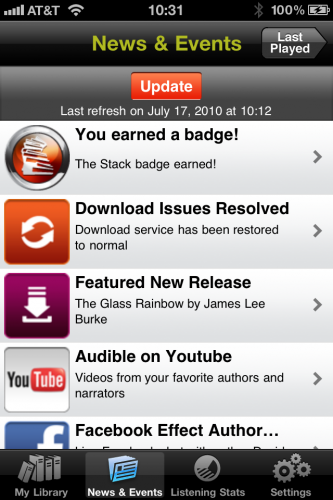 launch, Audible was saying they had problems with their servers, but an announcement in the news feature of the App says that’s all cleared up. But it is still taking over an hour to download a one half of a book via WiFi. I’ve tried testing that on two different WiFi networks with the same results.

There’s a feature to show books already in your iTunes Library, but due to Apple’s current iDevice file system (or lack thereof) you can’t access a book already in your iTunes library, which is also a glitch but one related more to iOS4’s limitations than Audible’s. Who needs to copies of a book in two different libraries? Sure that can be resolved by just not syncing books via iTunes and removing them from that library, but at the current download speeds I’m seeing, using iTunes is preferable to the new App for getting books to my devices. That said, none of the books stored in your iTunes library contain the chapter info or the other metadata associated with a book downloaded by the App. (By the way, one of the nice features of Audible.com is that any purchases you have made remain in your library in Audible’s cloud. If you need to re-download them at any point you can easily do so. )

Not having an Android or a Blackberry device, I can see where the Audible App is a big plus for that platform for audio book lovers. But I’ll need to do some more testing to see if it is worth occupying some space on my iPhone given that it can’t access the iTunes library at present. I’ll be doing some driving this week, so I’ll be checking it out further.