Students can score a free Xbox 360 with the purchase of a Windows computer thanks to a new promotion from Microsoft.

Resurrecting last year’s popular buy a Window PC, get an Xbox 360 promotion, Microsoft partnered with six U.S. retailers to offer a free 4GB Xbox 360 to students that buy a Windows PC priced over $699.

The Back to school promotion from Microsoft is live at Best Buy, Dell.com, Fry’s Electronics, HPDirect.com, Microsoft Stores, and NewEgg.com.

One of the best parts about this promotion is the instant gratification of an Xbox 360. There are no forms to mail in or third-party fulfillment services to wait on. Just buy a qualifying Windows PC from one of the retailers listed, add an Xbox 360 to your cart and enjoy the games. 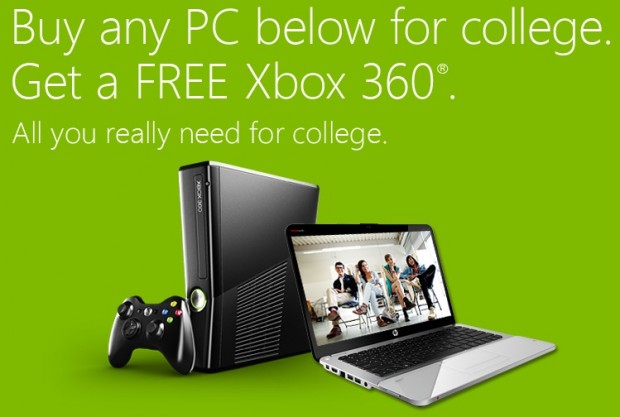 As Kevin Purcell notes over at Notebooks.com, this is a great way to get a thin and light notebook for class and a game console for the dorm. Kevin offers up a number of great suggestions for students looking to participate in this promotion.

Rumor has it that Microsoft will offer cheap upgrades to Windows 8 for notebooks purchased in June, so it might be worth holding off a few weeks. The free Xbox 360 promotion runs through September 8th, or until supplies run out.

HP offers a free Xbox 360 with the following notebooks:

Dell doesn’t have a landing page yet, but students should try to pair the $200 eGift card promo with the free Xbox 360 deal for maximum savings. Based on the announcement, the Dell XPS 13 Ultrabook qualifies.

The Windows Store offers a wide range of notebooks and ultrabooks that qualify as well as the Samsung Series 7 Slate.

NewEgg offers a choice of 15 laptops that qualify for the free Xbox 360 promotion.

Best Buy doesn’t have a landing page yet, but it is worth keeping an eye on as the store may beat the prices of some notebooks listed at the Windows Store.

Students need a valid student ID to purchase in stores and or a .edu email address to purchase the deal online.