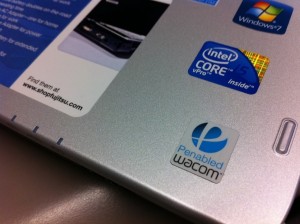 Normally I’m pretty ambivalent on PC case badges, those little decals that let you know what’s inside your machine. But after all the confusion over the digitizer in the HP Slate 500, I’m picking a side and it’s pro-badge. Strongly pro-badge.

The confusion started even before the official announcement last week. An earlier report claimed it was N-Trig. The leaked video showed a pen that was clearly thick enough to hold a battery, indicating the N-Trig Digital Pencil. Engadget initally stated it was Wacom (since changed). On-screen troubles with palm rejection in our InkShow didn’t help. Even knowing it’s N-Trig doesn’t answer everything since they offer both a battery-powered pen and a battery-free option, which we’re discussing in the forum. I’ve been up and down the datasheet, and it’s just not listed. All this points to a need for clarification and simplification on the subject, not just in the HP Slate, but industry-wide. Fortunately, there’s already a system for that.

The badge doesn’t tell me whether it’s touch-capable or how many points it can recognize, but that’s not relevant to the compatibility issue (and point recognition can be expanded via software). If it’s touch-capable (and it is), it will work with any set of living hands (and possibly zombie hands – can’t know for sure). What it won’t do is work with any pen that’s not Wacom Penabled. Even pens from Wacom’s other pen tablet products won’t work with it. The badge is a precise statement of compatibility.

N-Trig would need two badges, one to specify compatibility with the battery-less pen and another for the battery-powered Digital Pencil. I believe the Pencil should work with both, but for simplicity’s sake, the badge should specify pen or pencil.

As tablets enter the mainstream, it is vital that consumers be informed of what’s in their device, especially given how easy it is to lose pens. Furthermore, pens are very personal input devices. Users will want options. They will need to know which pens work with their tablet. So to all Tablet PC vendors, please stop hiding what digitizer is in your devices and start displaying those badges so we know what’s what.

Yes, I know badges can be ugly (or awesome, depending on your geek inclination), but they aren’t that hard to peel off if you don’t like them. What do you think? Do you like them?