Ballmer: Android's not free (because of license fees to Microsoft) 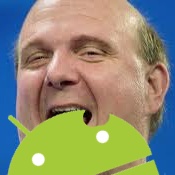 I’m sure the rookies among us will cite this as more anti-Ballmer rhetoric, but is it our fault the Big Ballmer says crazy $#!%? For instance, in an interview, Microsoft CEO Steve Ballmer claims Android isn’t free? Why? Because vendors pay Microsoft a licensing fee.

WSJ: Is that difficult in an environment where Android is free?

Mr. Ballmer: Android has a patent fee. It’s not like Android’s free. You do have to license patents. HTC’s signed a license with us and you’re going to see license fees clearly for Android as well as for Windows.

From WSJ via Business Insider

So Android isn’t free. If a vendor wants to install it on their devices, they have to pay a license fee. To whom? Google? The Open Handset Alliance? No, to Microsoft. To sell a device running Android, you have to pay Microsoft. Sounds like some crazy $#!%, but it’s closer to reality that some may realize.

For HTC, it’s already true. Microsoft got them to agree to pay a license fee on all their handsets, including those that run Android. Backed by that precedent, Microsoft is now pushing Motorola to do the same. If you understand the power of precedent in the legal world, then you know Moto, even if they weren’t dwarfed in size by MS, has little chance of resisting. I would not be surprised if, by this time next year, Samsung and LG will also be paying Microsoft to use Android.

Furthermore, old-timers may recognize parallels between this and the rise of MS-DOS where Microsoft’s licensing structure made it cheaper to pay MS a fee for every PC sold, regardless of whether it ran MS-DOS (which was alleged to have shut out competitors). You may also recall Apple was the power to beat at the time (distracting competitors from other concerns), and rock-solid UNIX, once seen as a potential OS standard, ultimately crumbled under its own fragmentation.

For as much as I shake my head at what Ballmer doesn’t know about tech, I admit the man knows business. Microsoft is moving toward making money on every Android device sold. Bing is steadily replacing Google as the search engine on Verizon’s Android devices. It’s actually conceivable that Microsoft could pull in more revenue from Android than Google does (at least in the States), and that will be some crazy $#!% indeed.