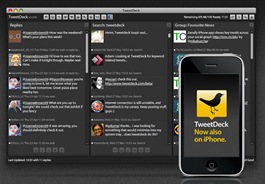 Twitter clients are where a lot of the action is in software development these days both on the desktop and on the iPhone. It seems like not a day goes by that we don’t have a new client, a new update, and new features. Yesterday and last night a couple of the biggies in the Twitter client biz did some updates. Both Tweetdeck and Seesmic Desktop pushed updates.

Tweetdeck offered up both a new iPhone client and a new desktop client and the winning feature there is that you can now sync up your Tweetdeck columns and searches between multiple devices. You have to create a Tweetdeck account to do so. Tweetdeck is also offering up a number of other features including a Reply All feature and continued integration with a couple of other services like Facebook and 12 Seconds. But again, the winning feature for me is the syncing between different machines. The Tweetdeck iPhone app is free and it also offers an interesting UI for sliding among columns and searches that depending on how many columns you have can get a bit cluttered.

Seesmic Desktop (which started out as Twhirl) wins if you want more Facebook integration and better photo sharing options. Seesmic Desktop is due to come out with an iPhone app soon, so I’m sure we’ll see more there as well. The interesting question is will it come in as a free app or not. Both Tweetdeck and Seesmic Desktop support multiple accounts.

Speaking of the iPhone, the competition for Twitter clients on the iPhone is very intense. I’d been using Tweetie (and still do), and it was for a time the favorite of many. It is still a good strong client with a very clean interface. Twittelator has a new version with a new feature that supports voice recording. Twitterrific, which was an early favorite of many iPhone users has fallen some in a lot of folks estimation but it still offers up some good features.

And there are more to choose from, but these are just the ones I’ve been testing out of late. No doubt about it, there’s a race on to capture your Twittering, and I’m sure things will only get more interesting as the race continues.