Come this November 22nd, Canadian carrier Bell will be launching the Optimus LTE, the most full-featured and powerful smartphone from LG to launch according to a leaked advertisement. The Android smartphone will support 4G LTE speeds alongside a high resolution 720p HD display that measures 4.5 inches diagonally.

As the Optimus LTE will not be utilizing the AMOLED-based display of Samsung’s forthcoming Galaxy Nexus smartphone, it will have a crisper display thanks to a true RGB sub-pixel arrangement rather than a PenTile sub-pixel matrix, which will give the IPS HD display on the Optimus LTE a better advantage in terms of clarity. As such, it may be among the first phone from the Android  to dethrone Apple’s Retina Display pixel density; the Optimus LTE is expected to have a pixel density of 329 ppi. 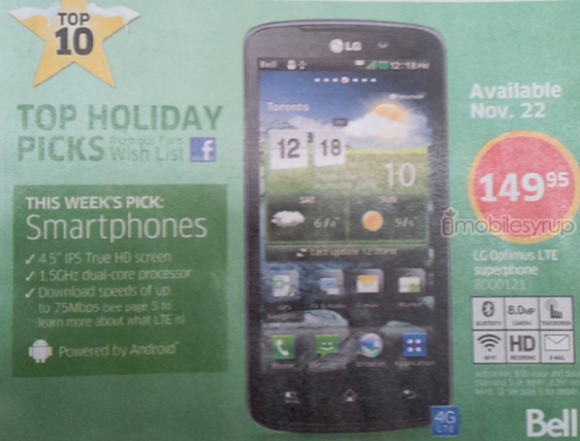 According to the leaked ad, the phone will be available for $149.95 with a three-year contract and $629.95 contract-free.

The device is expected to hit AT&T in the U.S. as the Nitro HD. In the U.S., availability and pricing information is not known.