Best Buy To Get iPad 3 Shipments on March 9

The iPad 3 will be announced on March 7, that we already know. In the past, iPad launches came at least a week before the tablet actually reached store shelves. This year, the iPad 3 release could be different.

A source has confirmed that Best Buy stores will get iPad 3 shipments on March 9. The stores could sell them that day, though is a chance that the stores won’t be able to sell the iPad 3 until March 10. Apple hasn’t released a product on a Saturday in recent memory, so the 9th seems like the more logical date between the two.

Best Buy could also be preparing for an iPad 3 release date during the week of March 11th. 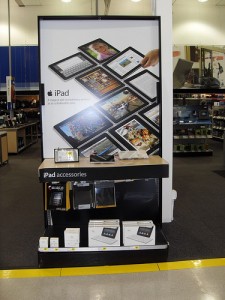 Best Buy Could get the iPad 3 as early as March 9th.

The shorter period between launch and release could have something to do with Tim Cook heading up Apple. Cook is very experienced in supply chains, so if anyone would be able to get the iPad 3 to stores in just a few days, it would be him. The shorter period gives less time for buyers to think about the purchase, but it also means fewer days of slowed iPad sales.

The same source claimed that the iPad 3’s form factor fits with all that we’ve heard so far. They claim to have seen a non-functioning model from the factory a few months ago. It had a Retina Display, a larger hole for a better camera, and was 1mm thicker than the iPad 2.

The source we spoke to was sure about his information, though there is some doubt based on Apple’s history. Apple has never released an iPad just two days after announcing it. Then again, Apple never showed off a new version of OS X to select journalists under embargo until this year.

We remain skeptical, but with new leadership, the change in iPhone launches and other factors, Apple may try to release the iPad 3 faster than any previous launch.

In any case, you may want to ask for the next few Fridays off from work, if you plan to line up for the iPad 3 on release day.