The spring unveiling of new smartphones, services and gadgets known as CTIA is coming to a close. From phones you can buy in as little as a few weeks to technologies that will make their ways into the next generation of smartphones and a new fast Internet connection for homes without access to cable, this is the Best of CTIA 2012.

Our list includes products consumers will buy directly and products that will make their ways into the smartphones of tomorrow.

HomeFusion is available to over 2/3rds of the U.S. population, already covered with Verizon 4G LTE. Before HomeFusion, rural and suburban users too far out for cable and DSL measured Internet speeds in kbps, not Mbps, but with HomeFusion, users can expect average speeds of 5 – 12 Mbps down and 2 – 5 Mbps up.

The plans aren’t cheap, and the data caps will limit what users are able to do, but Verizon’s top plan is generous enough to be attractive even to homes where gaming and Netflix streaming are common. 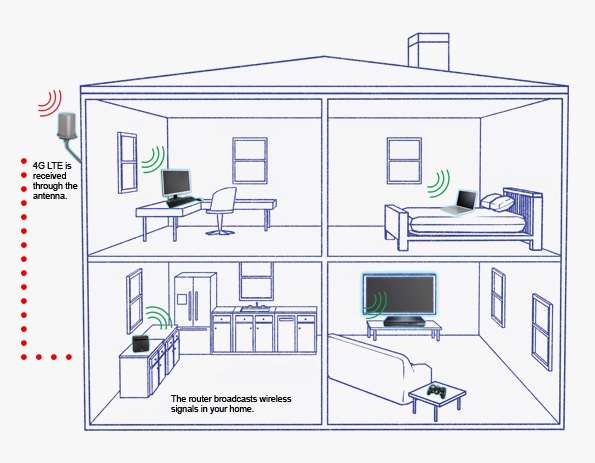 HomeFusion uses an external antenna for better signal strength and includes a router that supports 20 wireless devices and four ethernet ports, something not found on the MiFi devices many rural users had relied on for Internet.

Because Verizon HomeFusion is bridging the last mile of connectivity at accessible prices to customers nationwide it is the GottaBeMobile Best of Show winner for CTIA 2012.

The Droid Incredible 4G LTE is the latest Android smartphone headed to Verizon with 4G LTE and a well-sized 4-inch display.

Sense 4.0 will be a selling point for many consumers, though just as many power-users will miss the vanilla Android 4.0 experience.

The HTC Incredible 4G LTE is on the way to Verizon in the coming weeks, no price is available.

Consumers don’t need to spend $200 to get a 4G LTE smartphone with attractive specs and looks now that the Samsung Focus 2 is on the way to AT&T.

The $50 on-contract Windows phone joins the Nokia Lumia 900 on AT&T’s growing 4G LTE network that delivers speeds up to 10x faster than 3G.

The Focus 2 is a mainstream, or budget priced phone, but it still offers features consumers want like a 4-inch display and a thin design.

The Samsung Focus 2 earns the GottaBeMobile Best Mainstream Smartphone of CTIA 2012 award thanks to a well-rounded feature set and consumer friendly pricing.

WaterBlock is a nano-thin film with, “highly effective, water-repelling properties,” capable of protecting devices from being fully submerged in water as shown in the video below.

Consumers can’t buy HzO WaterBlock for individual phones, but we expect to see this technology in the next generation of smartphones, delivering waterproof phones without gaskets and seals that add bulk.

Read: HzO Wants To Waterproof Smartphones and Tablets with WaterBlock

HzO won’t talk about which phones will use WaterBlock, but it wouldn’t surprise us to see WaterBlock show up a new iPhone or the next hot Android smartphone.

Kyocera’s Tissue Conduction concept caught our attention at CTIA thanks to the promise of hearing callers in noisy environments.

Instead of relying on a speaker that is easily drowned out by construction, crowds and background noise, the Kyocera Tissue Conduction technology sends vibrations through the tissue in a users’ head which they can hear.

The technology works best when touching tissue right near the ear, but it works on the cheek and through hearing protection typically worn in noisy environments.

Kyocera recognizes the industrial applications, but plans to include Tissue Conductive technology in mainstream phones so everyone can hear who’s calling in a noisy environment.

Because we all want  to hear calls in loud environments, Kyocera’s Tissue Conduction prototype is our Best Innovation of CTIA 2012.