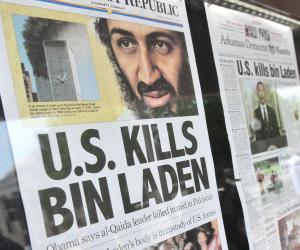 Whenever there is a big news story, there will shortly follow a series of stories that talk about how the big news is being covered/disseminated/spread around by social media and technology we employ and enjoy in our everyday lives. It’s as if an entire new cycle of coverage for any big story has been created. Actually there’s no “as if.” That’s exactly what happens.

This past weekend certainly was filled with big news stories. Both the Royal Wedding and the killing of Osama Bin Laden were big stories, although of very different stripes. As the coverage was being written about how social media and technology helped those watch or ignore the Royal Wedding the news about Bin Laden began breaking. And of course whenever there is a big news story these days, Twitter features prominently, followed closely by Facebook. Some point to a tweet from former Defense Secretary Don Rumsfeld’s chief of staff as actually breaking the news that bin Laden was killed.

Old media and new sources (Twitter, blogs, Facebook, etc…) will probably squabble about the significance of respective platforms for years to come when it comes to “breaking news.” In my view technology has advanced to a point where I believe the mass dissemination of news is quicker, but I’m not sure if the speed in and of itself is that much faster. While More people hear of news sooner and spread it faster, but I think the spark of any story still operates at the same basic speed. Certainly the messiness that comes with breaking news is just as messy, if not more so.

There’s an interesting read about this from Bryce Dot VC called Ten Years of Innovation Highlighted in One Night. Like the author I got most of my news from TV and radio ten years ago, whether it was first hand, or whether someone called me with news that they had heard. In fact, that’s what happened on that horrible morning on 9/11. As I was getting out of my car to enter my office, my wife called me to tell me that a plane flew into the first tower. Before I had even gotten to my office, she called me with news of the second plane and the second tower. At the time I was depending on two sources for updated information. One of those sources was updating web pages as quickly as I could, the other was the radio. I remember all of us sitting in the theatre that morning listening to the radio for any fresh news we could.

Sunday night, my wife and I didn’t have the TV on. We were watching a movie though, via Netflix. We wouldn’t have known about the impending presidential address that hinted towards the inevitable news if my smartphone hadn’t chirped with an update from a news source that it was about to occur. So, we turned off Netflix and went to the cable news sources and Twitter. Both were relaying about the same info (it makes you wonder who is the chicken and who is the egg) until the news finally broke. Before the news broke I sent text messages to my sisters and a few friends. About half were aware something was up, the others hadn’t heard a thing. Speculation was rampant all the way around, and as we see still today, a lot of the supposed details are being amended and expanded upon now that things have settled down.

Breaking news is always a moving target to pin down and always will be. There will always be follow up and follow through after a big story breaks. But what I find fascinating in the context of that 10 year period is that at a core level the news of the horrible attacks on 9/11 and of the death of Osama Bin Laden, both essentially reached me via a network of some kind. That’s fundamentally no different than messengers passing back and forth between towns and villages with news, or telegrams passing along wires, or phone calls, or reading a Twitter feed.

But I keep coming back to that Netflix/smartphone thing. In year’s past when there was no Netflix streaming (or any of the other sources for that kind of entertainment) we would have been alerted by a crawl on the TV screen or some network anchor talking head breaking in to give us the news that there would be news. This time around we probably would have passed blithely into a night’s sleep once the movie had finished had I not set up the smartphone for those kind of alerts.  But then again, I bet someone in my family or network of friends would have picked up the phone and called. So that leaves me to think that multiple dissemination sources to get this kind of news is a good thing. Again, I think the author of the piece I linked to above is accurate in that these changes happen gradually and almost seem to evolve imperceptibly.

We certainly do live in fascinating times. I’m curious as to how your hearing about news has changed with technology. Tell us in the comments. What do you rely on? Or do you? As an example, I know that via a local Twitter feed I’m able to get better traffic alerts that affect my travel plans leaving and returning from work on occasion. That info was available before, but I have speedier access to it now and that helps me choose my route to and from work.

Tell us your thoughts.