According to Engadget BitGym recently released an SDK for developers who want to create motion games for iOS and Android. The games will use the front-facing camera of iPhones, iPads, and Android devices to track gamers’ movements.

BitGym can track three-axis movement and even has support multiple players at once. Gamers need to make sure the front-facing cameras can actually see them, but BitGym shouldn’t require as much room as the Kinect does in order to work. That’s largely because the software doesn’t need to see the gamer’s whole body.

Gamers playing BitGym games have the option to play the games on their mobile devices, or they can choose to play the game on a TV. Using an Apple TV with AirPlay for iOS devices or GoogleTV boxes games can play motion games with BitGym on their HDTVs for likely a fraction fo the cost of a Kinect game.

The software runs on the Unity engine because it supports both mobile platforms. Unity will also support Windows Phone 8, but we don’t know if BitGym will work with Microsoft’s new platform. 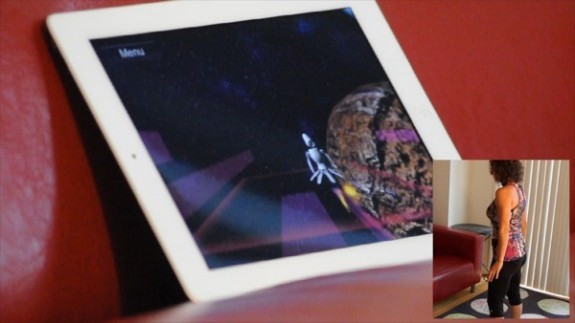 While the SDK to help developers create apps and games with BitGym is available now, we’ll have to wait a while before those apps can launch. Apps with BitGym won’t come to out devices until sometime in 2013. Hopefully early 2013, but we don’t know.