Fresh off announcing another huge, temporary Xbox One price cut, Microsoft is finally ready to reveal the savings that shoppers can expect from its online store this Thanksgiving weekend. A new Black Friday 2015 deals page on the retail site reveals hugely discounted Xbox One controllers, $30 off the cost of Xbox Live and a savings bundle for the Surface 3.

A preview page containing tons of Black Friday 2015 deals is available on the Microsoft Store website right now. Each year the retail arm of the software giant offers some savings on notebooks, desktops, games and its own Surface tablets and Xbox One consoles. This year’s deals all kick off on November 26th at 12 A.M. Eastern Standard Time. 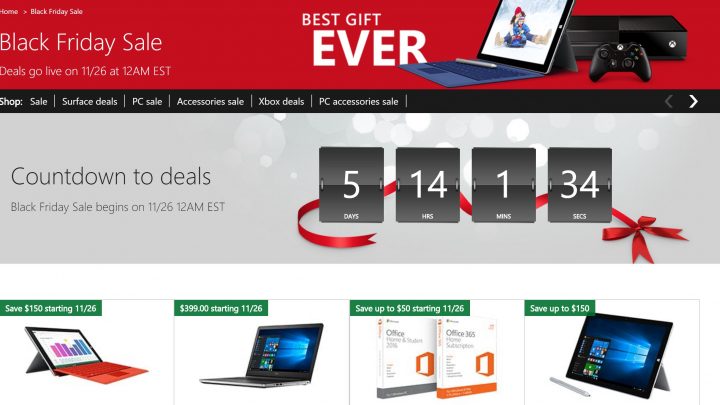 Microsoft will sell is Surface 3 with a Type Cover starting at $479, twenty dollars less than what the Surface 3 would cost on its own. Microsoft doesn’t bundle the keyboard accessory with any of its Surfaces, forcing users to pay $120 for it on its own or use a wired or wireless keyboard accessory. Models with more storage or LTE wireless data support will cost more than the 64GB Wi-Fi base bundle that’s $479.

Xbox Live Gold is a core part of the Xbox experience. Without it, Xbox One owners aren’t able to play games online with their friends, for example. The service also gives users select digital game downloads from Microsoft’s Xbox Store at no additional charge. For Black Friday 2015, the Microsoft Store is slashing the cost of an Xbox Live Gold 3 month code in half. A three month code normally costs $24.99. That puts the Xbox Live Gold sale price at $12.50, which is a huge deal. Users that choose to pay for Xbox Live month-to-month are charged $9.99 each month for the service. Yearly subscriptions to Xbox Live cost $59.99. It doesn’t appear as if Microsoft will discount any other Xbox Live subscriptions.

Microsoft says that it’ll offer up to 50% off on Xbox One and Xbox 360 during its Black Friday 2015 sale. The site doesn’t yet offer any more details on those discounted games though, which is slightly disappointing. The company has already revealed the savings that users can expect on Black Friday when they shop for games directly through the Xbox Store.

Microsoft Office Home & Student 2016 will sell for as little as $99.99. To be clear, this is the full version of Microsoft Office, not a year of the company’s Office 365 subscription service. To be clear, The Microsoft Store will also offer the $299 Xbox One bundles that it revealed this morning. The company slashed the cost of select Xbox One bundles by $50. Normally, the Xbox One costs $349 for a model with 500GB of storage and a single wireless controller.

Black Friday 2015 deals include more than just the things that Microsoft makes. There are some good deals on accessories too. Power Beats 2 Bluetooth headphones will sell for $99.99. Beats Solo 2 On-Ear Headphones will sell for $96.99. The Roku Streaming Stick, a tiny dongle that plugs into user’s television’s, will have a sale price of just $39.99.

The Microsoft Store doesn’t charge for returns and is offering free shipping on all items.