Now that the Eclipse Black Ops 3 DLC release is here for the PS4 and Xbox One, we want to walk through the important details that gamers need to know — including our Eclipse DLC review — and talk to buyers who are trying to decide if they want to buy the new maps.

After some initial problems loading the DLC, most gamers are able to access it by rebooting the Xbox One completely. If you have any issues, you can check out the troubleshooting section below including what to do if you are a season pass owner that sees a price on the Xbox One DLC 2 map pack. 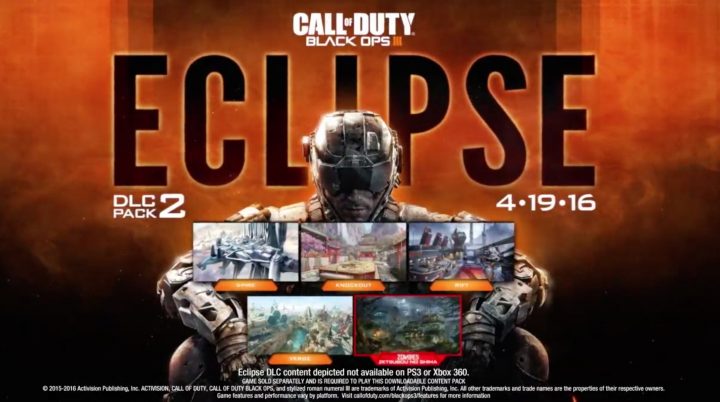 What you need to know about the Eclipse Black Ops 3 DLC release date.

The Awakening Black Ops 3 DLC 1 arrived in February and March. Users who bought it alone can upgrade to the Season Pass to get all of the DLC packs.

Here is a closer look at the Black Ops 3 DLC 2 release details for PS4, Xbox One and PC.

The Black Ops 3 DLC 2 release date was May 19th on Xbox One and PC, after an initial arrival on PS4 in April. 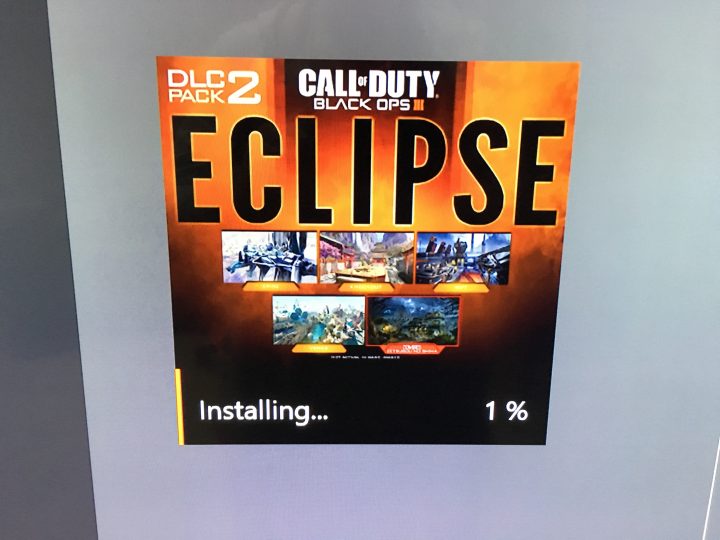 You can now install the Eclipse DLC on Xbox One, but not on PC yet.

Sony offers a 30-day exclusivity window for Call of Duty: Black Ops 3 DLC, which is why PS4 players gained access to the DLC early and other gamers had to wait.

Sony includes a free dynamic Black Ops 3 DLC 2 theme that offers a look at the Ztsubou No Shima map on your PS4 dashboard. PS4 owners can go to store to buy Eclipse and get this new theme.

The Xbox One Black Ops 3 DLC 2 size is 7.92GB, which will take a while for you to download. This is slightly larger than the PS4 DLC 2 map pack that clocked in at 6.9GB. This difference may be due to added elements the fix issues or simply differences between consoles. 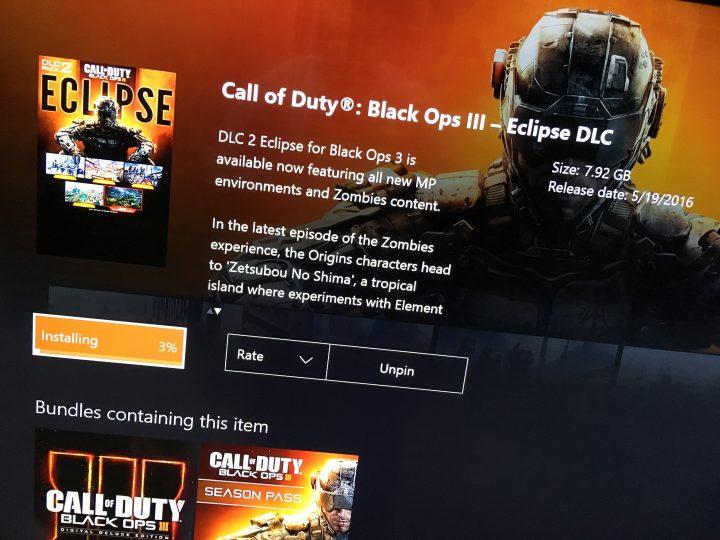 The Xbox One Black Ops 3 DLC 2 map pack is huge.

On Twitter David Vonderhaar announced that the maps are coming as a standalone download, not connected to a Black Ops 3 update. This is a change from the Awakening DLC, but it is not clear if we will still see a new Black Ops 3 update after the tweets from the PC Development Director at Treyarch.

We expect a similar PC Eclipse Black Ops 3 DLC 2 size when it shows up on Steam and the Xbox Store.

There is no Call of Duty: Black Ops 3 DLC 2 pre-load for Eclipse for Xbox One and PC. When the PS4 Eclipse Pre-load started Season Pass owners in the UK and other territories could not pre-load.

With our PS4 on rest mode and the DLC pre-ordered we turned it on in the morning to find that the Eclipse DLC was installed. You may be able to do the same thing on your PS4 now, or even remotely using the PlayStation App to pre-order.

You should expect a long wait as you download the Eclipse Black Ops 3 maps if you aren’t able to pre-load. Be sure to start this download as soon as possible, since even fast connections may take some time to download a 7.9GB file.

If you cannot download the Eclipse Black Ops 3 DLC 2 map pack or play the new maps you need to try a few options that can help you get access to your new maps and Zombies.

If you do not see the Eclipse DLC 2 map pack in the Xbox Store or in the Call of Duty: Black Ops 3 store, you need to turn your Xbox One completely off and then wait about 15 seconds and reboot. This should fix most of the issues. 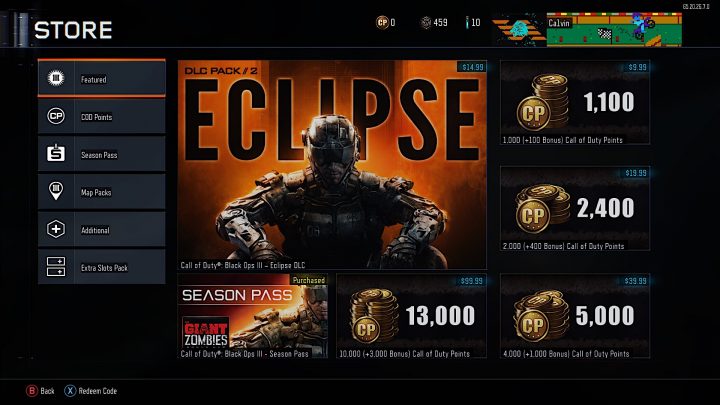 If you own the season pass, you will not be double charged.

Some users, including us, see a price for the Eclipse DLC 2 map pack, even though we have a season pass. Activision is aware of this issue. If you do have the season pass, you can click on the buy option and you will not be charged extra.

If you are having trouble finding the Eclipse Black Ops 3 DLC add-on you can use these directions on the Xbox One.

On the PC you can try;

When in doubt you need to close the Black Ops 3 game and restart your console to fix most issues.

After spending the last two weeks playing the new maps, this is our succinct Eclipse Black Ops 3 DLC 2 review. While I played on PS4, the overall experience should be the same on the Xbox One and PC.

I am a fan of all the new Black Ops 3 maps, but my favorites are Knockout and Spire. The visuals on Knockout are beautiful and varied and it plays well on many game modes.

Spire is just the right size for Kill Confirmed and while challenging is not as hard as Verge while playing Domination. I love the wallrun options on this map, even if landing in the center lobby is a very quick way to die.

Playing Domination on Verge is an exercise in frustration. The map looks great and it is fun for many game modes, but if you play domination you will likely want to throw in the towel on B flag if you aren’t the first to get it — unless you have a good team.

At first I hated Rift in Black Ops 3, but then I learned the layout better and where you could wall run around your opponents. After two weeks this is a map I enjoy seeing come up — especially for hardpoint.

I played these on the PS4 in the Bonus playlist that includes all the new maps and a variety of game modes. This uses Core rules across the different modes. The maps are in the general rotation, but I rarely found a new Black Ops 3 DLC 2 map in Hardcore Kill Confirmed.

The only way I would improve the experience is to include a special Hardcore bonus playlist of the new maps. Ultimately this is a fun map pack, and I don’t regret my Season Pass purchase.

There are four Black Ops 3 DLC 2 maps in this Eclipse Black Ops 3 DLC map pack. We provide an explanation and screenshots of each in the slides at the bottom of this post.

The slides at the bottom of the post include Eclipse Black Ops 3 gameplay videos as well as walkthrough videos. You can use both of these to see how the map plays and to explore the maps virtually.

This offers one remake, that is upgraded to take advantage of the new movement system and three brand new maps. Several are bright and inviting, while one is dark and a little off-putting.

Below and in the slides you will see more new Zombies Zetsubou No Shima gameplay.

The Black Ops 3 DLC 2 release will deliver a new Zombies experience that Jason Blundell of Treyarch calls “fundamentally disturbing” thanks to the atmosphere and artistry that goes into creating this map. We now have a better look at the Ztsubou No Shima trailer.

A familiar cast starts on a boat on the way to an island in Feudal Japan, and that is where things get crazy.

Use the slides below to get a closer look at the new Black Ops 3 maps and Zombies. We’ll update this with gameplay as soon as we have it.