Several new BlackBerry smartphones were seen in a leaked advertisement for Canadian carrier Rogers, including the un-announced BlackBerry Bold 9790 along with the white version of the Blackberry Bold 9900 and BlackBerry Curve 9360. 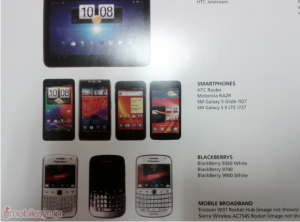 Additionally, the Bold 9900 and Curve 9360 will also be available in a paler shade. Both devices were initially released in black, but following RIM’s tradition of offering a complementary white shade, these two new BlackBerry 7 OS devices will be getting a color makeover as well. More colloquially referred to as a ‘WhiteBerry,’ the white editions will be coming soon, but it’s unclear when the timeline for release will be. It’s unclear if any of the U.S. carriers which are sporting the new Bold and Curve will also be offering the white models Stateside.