Verizon Wireless’ Motorola Droid RAZR has been out since October but that hasn’t stopped the carrier and manufacturer from launching new versions of the device. At CES, we saw white and purple versions of the slim Android device and now, Verizon has released a blue version Droid RAZR onto shelves.

The carrier made the device official this morning and it’s currently on sale in select Verizon retail stores here in the United States. So, that means that those interested will want to place a call into the store before heading down in an attempt to pick one up.

For those that are adverse to heading into retail stores, the device will become available through Verizon’s online store starting May 17th, the day that the phone was previously rumored to be out. 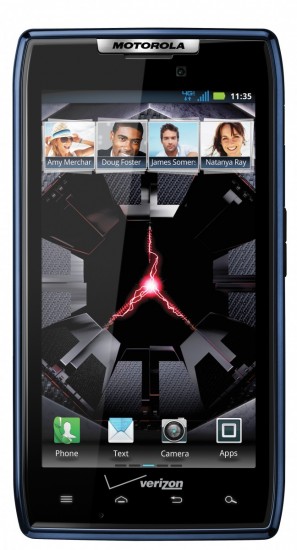 The blue Motorola Droid RAZR is exactly the same phone as the Droid RAZR that launched in October only it has a very distinct blue hue to it.

What this means is that it sports sports a dual-core processor, an 8-megapixel camera with HD video recording capabilities, a 4.3-inch qHD Super AMOLED display, and a design that checks in at a slim 7.1mm.

It doesn’t have the large battery that the Motorola Droid RAZR MAXX has but we found that the battery on the plain old Droid RAZR gets the job done pretty well.

It’ll also have access to Verizon’s 4G LTE network which means speeds that can reach up to 10 times faster than those found on Verizon’s 3G network.