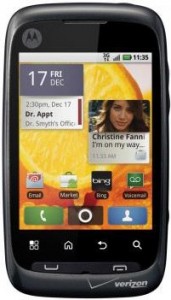 The Motorola Citrus Android smartphone will launch on Verizon Wireless for an affordable $50 on contract price after a $100 mail-in rebate. The Android-operated device won’t get the Droid branding on the U.S. CDMA carrier and instead will be targeted at the low-end smartphone segment. It does come with Android 2.1, a 528 MHz Qualcomm processor–which is a departure for Motorola which has traditionally used OMAP chips from Texas Instruments–and a QVGA 3-inch capacitive touchscreen with Android 2.1. The device does feature the Swype on-screen keyboard, which is a software keyboard that will allow you to swipe your fingers across letters and connect them, as if they were dots, to form words without having to lift your fingers off the screen.