We’ve already talked about one method to bring over a beloved keyboard replacement from Android over to iOS with SwiftKey Note, but Swype is another favorite keyboard replacement on Android that isn’t officially available on iOS. However, if you’re jailbroken, you can bring Swype-like capabilities to your iPhone or iPad.

TouchPal has just been updated for iOS 7, meaning that those who have their iOS 7 device jailbroken can download and install the iOS 7 Jailbreak tweak and begin swipe-typing like there’s no tomorrow (no iPhone 5s support, however).

However, unlike a lot of tweaks that you’ve undoubtedly installed over the last couple of months, TouchPal is a Chinese jailbreak tweak where most of the menus and instructions in Cydia are in Chinese, but it still works seamlessly with the English iOS keyboard. 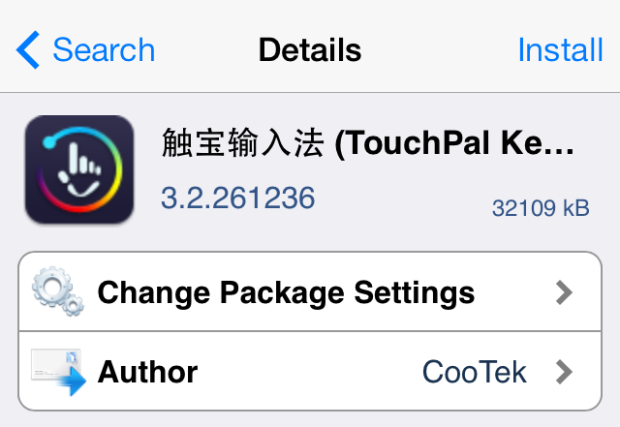 Anyone that has used Swype on Android will be very comfortable using TouchPal on the iPhone, since it’s pretty much exactly like Swype; you just slide your finger across the keyboard to each key that you want to press on in order to form a word. Many Swype advocates will say that it’s a lot faster than traditional typing, but you can be the judge of that for yourself.

Since the tweak is in Chinese, this means that the entire settings menu is in Chinese, but one helpful Redditor was kind enough to translate the settings to English for users to refer to. The tweak should work perfectly right off the bat without having to mess with any settings, but in case you want to customize TouchPal even more, these translated Settings might prove useful for you.

Now, the developers behind TouchPal have a keyboard replacement for Android that’s available in the Google Play store, called TouchPal X, but if you’re wanting a Swype-like experience on iOS, this jailbreak tweak is the way to go.